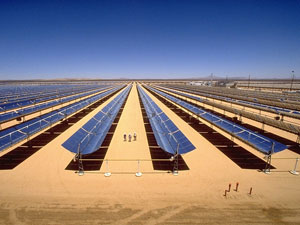 Solar power in the United States faces an uncertain road ahead, despite the sizeable gains it made last year. Spurred by federal stimulus funds, the US market jumped from $3.6 billion in 2009 to $6 billion in 2010 according to a new report by the Solar Energy Industries Association and GTM Research. But the country fell further behind European solar leaders like Germany and Spain, whose governments have their own aggressively funded programs. And, as MoJo‘s Kiera Butler explains, the speedy expansion of US solar into California’s Mojave Desert is raising important concerns about ecosystem damage.

Those concerns have put environmental groups in a tricky spot between their support for renewable energy and habitat protection. Most of the Mojave projects are still moving forward, but lawsuits from green and tribal groups could trip up some of them. The near-term future of solar power in the US will also depend on whether President Obama’s stimulus money keeps flowing. For now, energy companies have until the end of the year to qualify for funding. Meanwhile, some solar advocates are suggesting alternatives like installing panels on urban rooftops. New Jersey, which ranks second behind California in solar power generation, has made progress with that strategy.