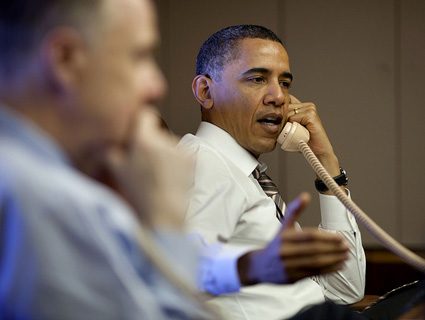 There’s been much gnawing within the commentariat concerning the Obama Doctrine. That is, if there is one. In his speech on Libya Monday night, the president rendered a rather clear explication: the United States will do what it can, when it can, where it can—to serve humanitarian and security interests—after carefully weighing the costs and benefits of the particular action under consideration, after consulting with allies and regional partners in order to form an effective coalition, and after assessing the needs and desires of the folks on the ground. These guidelines are not too difficult to fathom. Obama was detailing a doctrine of limited and realistic intervention, with several sliding scales. Bottom line: no more Iraq invasions.

Throughout his speech at the National Defense University (NDU), Obama implicitly and explicitly compared the Libyan military action to the Iraq war, noting that the latter was neither justifiable or cost-effective. In many ways, his doctrine is an anti-doctrine, counter-posed to what his predecessor did. Repeatedly, Obama made this point. Here are the notable instances of when he insisted he was not proceeding in a Bushian manner:

The Bush administration and its neocons had a made-in-the-USA world view: the United States could and should act largely on its own and use military force to implement (or impose) its vision for the Middle East. Obama’s take is more modest. The United States must use its power judiciously and in concert with other players, reserving the right to go cowboy if absolutely necessary to protect the United States. On the way to different wars, Bush and Obama each decried a dictator and spoke as champions of human rights. They each generated complaints. (Bush refused to consider other options; Obama was light on congressional consultation). But at the NDU, Obama made sure to differentiate himself from Bush. In doing so, he was redefining the parameters of US interventionism—at least until the next one—and asserting that the United States, even as it engages in military action in the Arab world (while still fighting in Afghanistan), remains in a post-Bush era.