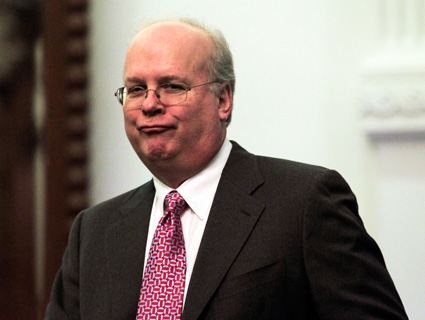 Karl Rove’s dark-money political operation has uncovered a major piece of what it’s calling “breaking news”: Elizabeth Warren, the White House aide in charge of assembling the new Consumer Financial Protection Bureau, once “made time for dinner” with me. Alert the blogosphere! Send out the tweets! Launch an investigation!

But there’s a slight problem with this supposed scoop: there was no such dinner. Nor a lunch. Not even a breakfast, or a snack.

Crossroads GPS, a non-profit co-founded by Rove that runs attack ads against Democratic candidates nationwide, has initiated an intriguing project called Wikicountability.org. This wiki site aims to post information on the Obama administration obtained by organizations, individuals, and journalists (via the Freedom of Information Act) and offer all these documents for crowd-sourcing. With this move, Rove’s outfit is aligning itself with the transparency movement. Its press release announcing the site declares:

The new initiative is designed to make federal departments and agencies more accountable to the public. Groups and individuals will be able to upload their own FOIA requests and responses to the website, creating a national clearinghouse for data concerning the Obama Administration. Thousands of pages of information from the Departments of Labor and HHS have already been uploaded to the site, and Crossroads is encouraging other groups and individuals to upload their own FOIA information to the site as well.

This Crossroads GPS project, though, is built upon a profound incongruity. The conservative organization is championing accountability and openness, yet it does not disclose the well-heeled funders and special interests underwriting its own efforts to shape the political system. Last year, Crossroads GPS—which Rove and Ed Gillespie, another former Bush White House aide, created following the Supreme Court’s controversial Citizens United decision—spent $17 million on the 2010 elections to elect Republicans. NBC News reported that a “substantial portion of Crossroads GPS’ money came from a small circle of extremely wealthy Wall Street hedge fund and private equity moguls.” Crossroads GPS is the poster-nonprofit for secret campaign mega-money. (By the way, Rove was hardly a fierce advocate of open government when he served in the Bush administration. In fact, while a White House aide, he used a Republican Party email address for official business—which placed his emails beyond the reach of open-government recordkeeping laws.) But now this secretive organization is deploying the issue of open-government to assail the Obama administration, which has a better record on openness issues than previous administrations (including the one Bush and Gillespie served).

Crossroads GPS promises that its new site will yield breaking news. That’s where I come in. Its press release boasts that the project has already posted documents yielding stop-the-presses revelations. These include the supposed scoop that Labor Secretary Hilda Solis “met with union bosses or attended their events” more than 40 times in a year—well, that’s less than one labor event per week—and the news that the office of Education Secretary Arne Duncan has not responded to a FOIA request for his schedule and travel vouchers. Another Rove-wiki scoop: the Department of Health and Human Services spent $3 million on an ad that explained the benefits of the health care reform law. Except this story was widely reported last fall.

But perhaps the most significant exposé Wikicountability.org claims is this:

What a scandal—a government official in Washington having dinner with journalists! (Is Moulitsas, the founder of DailyKos, a journalist?) But I’ve never had dinner with Warren. I have reported and written about her. I also once participated in an event at the New America Foundation with her. But no meals, as far as I can recall. Not that there’d be anything wrong with that. (I’d quibble with Crossroads’ description of me as “far left” and “anti-business,” but if Rove and his operatives want to taint this openness effort with political hackery, that’s their prerogative.)

After seeing the press release hyping the disclosure of a dinner that never happened, I went to the website to find the proof of this non-existent event. But there was no way to locate the document that exposed this nefarious Warren-Corn encounter. (The press release did not provide links to the relevant documents for the, eh, scoops.) I phoned Jonathan Collegio, Crossraods GPS’ spokesman, and inquired about the basis for this explosive charge. He said that Warren’s schedule had listed a dinner with me. Of course, no one at Crossroads had bothered to check what might have appeared on the schedule. And Collegio acknowledged it might be hard to find this particular page on the new website. He promised to send me a link to the tell-all page. But, as of this writing, he had not done so.

So Rove and his crew want to promote openness and break news—but without practicing openness and without checking facts. This is a sly maneuver on their part. If they had gone about it the right way—playing it straight and not manipulating the material, while disclosing their funders—they could have earned street cred among government accountability advocates. But, unsurprisingly, this clever idea is being used only for a political hit job. With this project, Rove’s motives are quite transparent.

* It turns out that Crossroads GPS’ press release was even more fact-free than I thought. The site does list Warren’s calendars for the last three months of 2010. I appear on her October 19, 2010, log at 5:45 PM: “Interview with David Corn.” Yes, I’ve been caught practicing journalism. As for Moulitsas and Kuttner, the calendars note that Warren had two phone calls scheduled with Kuttner and one breakfast scheduled with Moulitsas. No dinners with any of us. Zero for three.