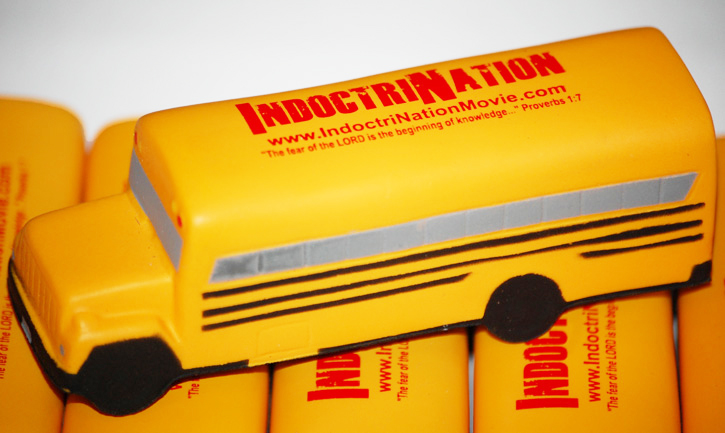 Evolution? Prayer in schools? Drops in the bucket, according to the new 90-minute “documentary” flick, IndoctriNation: Public Schools and the Decline of Christianity in America. (Check out the trailer below!) The film takes viewers on a trip across the US in a big ol’ yellow school bus to learn about the state of education, as presented by producer Colin Gunn, who won an award at the San Antonio Independent Christian Film Festival for something titled The First Blast of the Trumpet Against the Monstrous Regiment of Women. What Gunn and his family find in IndoctriNation, according to the movie’s website, “is a masterful design that sought to replace God’s recipe for training up the next generation with a humanistic, man-centered program that fragmented the family and undermined the influence of the Church and its Great Commission.”

As you can see from the trailer below, God-fearing Christians have no choice but to remove their children from public school—any public school—since any place of education that doesn’t constantly extol Jehovah is clearly an assembly line for the minions of Mammon. But how, you ask, will our cherubic, gentle good sheep of the Lord complete their educations, if not with those atheist homosexual unionized teachers at P.S. 123? Luckily, that’s where IndoctriNation‘s sponsors come in. According to the movie’s site, its financiers include:

There are others…like Wisdom’s Gate Ministries, which publishes the Home School Digest; NiceneCouncil.org; and the printing business that can be the “‘one-stop shop’ for all your marketing needs.” But you get the idea: The financiers and producers of IndoctriNation want to prevail upon you to home-school your child! They will use reason, emotion, and the occasional fudged fact to get you to agree with their worldview. Isn’t there a word for that? When you use repetition and emotional manipulation to inculcate someone with an ideology? Gosh, if there is, I sure can’t think of it.