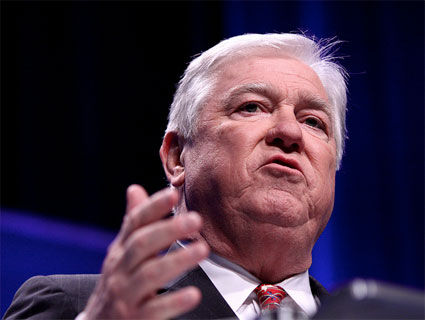 Would you like to read the gubernatorial emails of Mississippi’s Haley Barbour, a likely GOP presidential candidate? If so, it’s gonna cost you. At least $53,460—and possibly closer to $200,000.

Several weeks ago, Mother Jones filed a request under the Mississippi’s Public Records Act for all of Barbour’s official emails, calendars, call logs, and travel records since the beginning of his tenure in January 2004. Amanda Jones, Barbour’s counsel (who has referred to her boss as “one of the greatest governors that the State of Mississippi has ever had”), replied in a letter that the state could not process this request until it receives a check for nearly $60,000.

Jones notes that the state’s IT department had determined that there are over 30,000 sent and received emails currently available in Barbour’s account “generally spanning” 2006 through 2011. “This does not necessarily include all emails sent or received during that time period,” she writes, presumably because some emails might have been deleted or lost. “Nor does it include,” she adds, “any emails sent or received during 2004-2005,” the first two years Barbour was governor.

“The idea that it will take 832 hours over a span of 20 weeks is ludicrous, unless literally they’re trying to get it off the bottom of the ocean.”

In an interview with Mother Jones, Jones explains that the state, to fulfill this request, would have to go to the archives. The governor’s emails are backed up and archived daily, and the IT department, Jones says, estimates it would take a minimum of 30 minutes to retrieve each day’s backup. To gather the email from the 2006-2011 period, Jones says, would take an estimated 832 hours—though it could take longer to “extract” email sent and received prior to 2008.

Jones says that because Mississippi law permits a state office to collect a fee to cover the costs of fulfilling a public records request, Barbour’s office will do so in this case. (Under the law, the governor’s office could elect not to charge a fee for any reason it chooses—say, to advance transparency and openness.) She estimated that it will cost $30 per hour to retrieve the 2006-2011 emails, adding up to $24,960. “This is a very conservative estimate,” she notes, “as IT is not certain how long it will take to extract the email that was sent and received prior to 2008.”

Yet would it really require 832 hours of IT work to dig up Barbour’s emails? David Gewirtz, a nationally recognized expert on email and other IT matters, says that so much time would be necessary only if the governor’s office was using an antiquated system and storing the material in “some warehouse somewhere—think the Indiana Jones warehouse.” He adds, “The idea that it will take 832 hours over a span of 20 weeks is ludicrous, unless literally they’re trying to get it off the bottom of the ocean.” And after reviewing a technical description of the state’s email system provided to Mother Jones by Barbour’s office, Gewirtz said in an email, “Bottom line: these guys clearly don’t want to share and are putting up a lot of smoke to keep you out. So far, I’m not seeing anything particularly daunting or difficult technically….The system they use is essentially designed to do what you’re asking for. If they can’t meet that design spec, either they’ve been hiring incredibly incompetent people (doubtful) or grasping for whatever roadblocks they can find.”

As for the estimated costs, the search and recovery fees are just the beginning. The retrieved emails, Jones adds, will have to be reviewed by attorneys in Barbour’s office to determine if any might be exempt from release. The state law does not include many exemptions that would apply to emails generated while Barbour has been conducting gubernatorial business. But, as Jones points out, the state could withhold portions of emails containing “confidential or proprietary information from third parties.” And she maintains that Barbour’s lawyers would have to review each email to see if it held such material. Under the law, though, Barbour is not compelled to hold back such material; he could decide to release it. (In response to a previous request for Barbour’s emails covering a period of a few days, the governor’s office withheld several messages, citing attorney-client privilege.) Jones’ estimate for this legal review: 30,000 emails, reviewed at the rate of one per minute, at the $57 hourly cost of a government lawyer—this adds up to $28,500.

But wait. If Barbour’s office determines it cannot mount such a legal review without impairing its ability to perform other governmental tasks, Jones writes, it will have to retain an outside law firm at a charge of at least $175 an hour. That would boost the cost of the legal review to a minimum of $87,500. And these estimates for the legal review only cover the 30,000 emails already located. If other emails from that time or from 2004 and 2005 are found, the review will cost more—perhaps a third more.

As for Barbour’s daily calendars, phone logs, and travel records, all that, too, has a price tag. The travel records, Jones says, are spread across various state agencies, but those kept in the governor’s office “would require review.” Ditto for at least 5,000 pages of calendar and phone records. The cost, at a minimum, she notes, will be $4,731.

And it’s money up front. Barbour’s office, Jones writes, “will need to receive a check in the amount of $58,191 for the estimated costs before any documents are produced.” If it does turn out that the actual costs are higher, the difference will have to be paid before the governor’s office releases “any documents.” That makes it seem possible that Barbour’s office, after cashing a check for nearly $60,000 to get the process going, could boost the estimated fees by tens of thousands of dollars and not release any of the material unless that amount is paid.

The large fee—and the possibility of an even larger one—is quite a disincentive for a media outfit. When Mother Jones made a similar request for then-Gov. Sarah Palin’s official emails in 2008, the state of Alaska initially said the magazine would have to cover the $65,000 cost for the search and review. Eventually, the state waived these fees, but still demanded to be paid $7,000 to $13,000 in copying fees. Mother Jones, MSNBC.com, and Pro Publica, the non-profit investigative reporting outfit, agreed to cover these costs, share the documents, and place a searchable archive of the emails online. The state now estimates the Palin emails will be released at the end of May, after more than two and a half years of wrangling and processing—and many of the documents may be withheld. (Alaska’s open records law affords a state office more opportunity to withhold emails than does the Mississippi public records act.)

In her letter, Jones does not say when the Barbour material could be released—providing the governor’s office receives a check for $58,191. But her note suggests the search and review could take about nine months. That means, if the process doesn’t begin soon, it will not end—and there won’t be any emails produced—until after the GOP presidential primaries begin. Which might be just fine with Barbour.