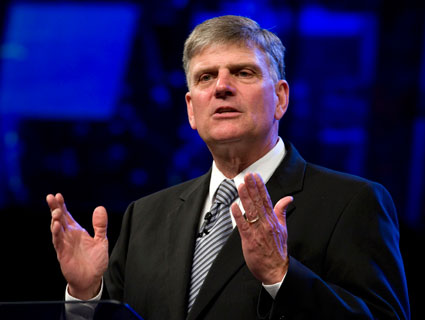 Yes, there’s a new Obama-Muslim conspiracy theory on the right: The evangelical son of one of America’s most famous evangelists says that President Barack Obama has allowed the Muslim Brotherhood to become part of the US government and influence administration decisions.

In an interview last week with Newsmax.com, a conservative website (that pushes the Obama-was-born-in-Kenya conspiracy theory), [see clarification at the end of the article] Franklin Graham, an evangelist like his father, Billy Graham, claimed that the fundamentalist Islamic political group has burrowed into the Obama administration and is shaping US foreign policy. Sounding a bit like Glenn Beck, Graham explained:

The Muslim Brotherhood is very strong and active in our country. It’s infiltrated every level of our government. Right now we have many of these people that are advising the US military and State Department on how to respond in the Middle East, and it’s like asking a fox, like a farmer asking a fox, “How do I protect my henhouse from foxes?” We’ve brought in Muslims to tell us how to make policy toward Muslim countries. And many of these people we’ve brought in, I’m afraid, are under the Muslim Brotherhood.

Infiltrated every level of our government—that’s quite a claim. Yet Graham did not name a single Muslim Brotherhood infiltrator or cite a specific Obama administration decision that has been manipulated by these crafty behind-the-scenes Islamists. (The quotes in the Newsmax article reporting Graham’s remarks differ slightly from what he actually said during his interview with Newsmax, according to the video of the interview, which is posted below.)

Though Graham did not back up his charge that Obama has opened the US government to the Muslim Brotherhood, he did say that he believes the president is more concerned with helping Muslims than Christians—both in the United States and abroad. When the Newsmax interviewer asked Graham if Obama has been doing enough to support Christianity and Christians at home and overseas, Graham replied, “No…If anything, it’s the opposite.” He added, “The Muslims are protected more in this country than Christians.”

Graham did not cite specifics on this point, either. A spokesman said Graham was unable to comment on his remarks to Newsmax since he was en route to Africa.

While Graham did not question Obama’s Christian faith during this interview, his comments tracked with the extremist right-wing claim that the president is a secret Muslim. And Graham has raised the matter of an Obama Islamic connection in the past. Last August, he told CNN that because Obama’s father had been a Muslim, Obama had a perception “problem.” The president’s father, who was not involved in Obama’s rearing, was born a Muslim, but as an adult he was an atheist. Obama was not raised as a Muslim.

It’s no surprise that Franklin Graham is worried about Muslims sneaking into the US government. He has declared Islam “a very evil and wicked religion.” Last year, he was disinvited from a National Prayer Breakfast event at the Pentagon after his Islam-bashing became an issue. (Sarah Palin quickly rushed to Graham’s rhetorical rescue, pronouncing his excommunication from this ecumenical breakfast a travesty.)

For his part, Graham was not at all apologetic about his attacks on Islam. Instead, he called the revoking of his invitation “a slap at all evangelical Christians.” He blamed the White House for orchestrating the move: “I don’t know if it’s exactly from President Obama. But I’m certain that some of the men around him are very much opposed to what we stand for and what we believe.” Graham added, “I just don’t understand why the president would be giving Islam a pass.” Could it be precisely because the Muslim Brotherhood had infiltrated Obama’s circles? Graham didn’t say so back then. Perhaps that was before he had discovered this plot.

CLARIFICATION: After this story appeared, Newsmax sent a note taking issue with the article’s characterization that it “pushes the Obama-was-born-in-Kenya conspiracy theory.” The conservative site says,

Indeed, the site has not championed the Kenya conspiracy; we apologize for the error. But it has generally aligned itself with birthers who suggest there is some sort of conspiracy afoot involving Obama’s birth documentation. During the 2008 election, the site ran a piece asking, “Where Was Obama Born?” In 2009, anti-Islam activist Pam Geller wrote a Newsmax article that noted there “might be something more sinister at work here,” regarding the president’s birth certificate. But the site has not gone Kenya.