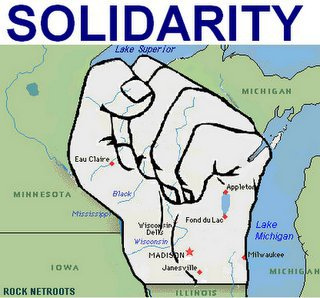 The fight pitting Wisconsin Republican Governor Scott Walker against labor unions and their supporters continues to rumble on, with a state bureau publishing the controversial “budget repair bill” in apparent defiance of a county judge’s temporary restraining order against doing so. If you’re the Democratic Party of Wisconsin, you want to overturn Walker’s bill as soon as possible—but you also want the drawn-out fight surrounding the controversial legislation to stretch as long as possible.

Here’s why: The state Democratic Party raised $1.4 million in less than two months, from February 1 through March 21, according to a new fundraising filing. As Milwaukee Public Radio reports, that’s $250,000 more than the party raised in all of 2010, a hotly contested election year in which Democrats fought desperately to stem the tide of Republican victories sweeping the country. (They failed, and both legislative chambers as well as the governor’s seat flipped from blue to red.)

The Democratic Party has capitalized on every twist and turn in the fight in Madison to hit up their base for cash. After the 14 Democrats in the state Senate fled Wisconsin to block a vote on Walker’s bill, the State Senate Democratic Committee used the self-imposed exile of the “Wisconsin 14” to raise $785,000 on the back of the Democrats’ departure. Those Democrats returned to Wisconsin on March 12 after Senate Republicans used a constitutional end-run to pass Walker’s bill without the Democrats present.

Since the return of the “Wisconsin 14,” Deomcrats have fundraised around the recall of the eight Republican state Senators who voted for Walker’s bill and who are eligible for recall. (Efforts by Republican activists are also underway to recall eight senate Democrats who opposed Walker’s bill.) Democrats hope to have enough signatures to trigger a recall by May.