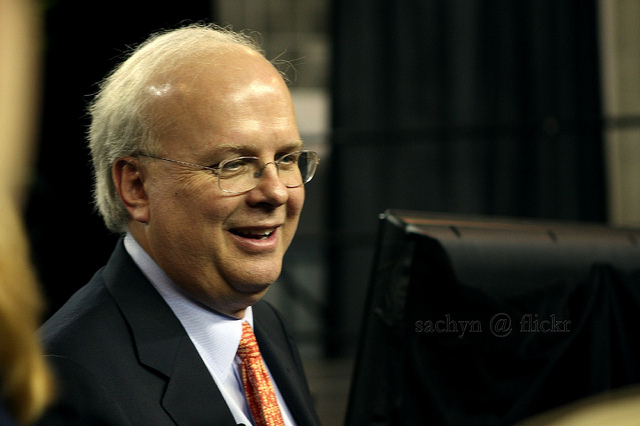 In just one election cycle, Republican guru Karl Rove helped build right-wing outside spending groups American Crossroads and Crossroads GPS into political juggernauts. Rove’s Crossroads groups played a major role in the GOP’s 2010 election trouncing, and are now plotting their 2012 strategy and raising bundles of money. Democrats, on the other hand, are searching for their own powerful outside groups, and for a figurehead, like Rove, to fight the flow of conservative cash in the next election.

As the Center for Public Integrity’s Peter Stone writes, the Democrats have yet to find their own Rove. They failed to react quick enough to the unregulated, post-Citizens United world of campaign spending in 2010, and now must play catch-up if they want to compete with American Crossroads and its ilk. That said, top liberal strategists including David Brock, founder of the watchdog group Media Matters for America, and ex-White House staffers Bill Burton and Sean Sweeney are quickly making up the lost ground, Stone reports:

Democrats initially stayed on the sidelines of the outside group money chase. But by fall, as the US House began to slip away, the American Federation of State, County, and Municipal Employees jumped in with $91 million, which led spending by all groups. AFSCME president Gerald McEntee said unions, now at war in states like Wisconsin with newly elected Republican governors, are determined to do more.

“We have to build a broader coalition to counter Rove & Co.,” McEntee said. “2010 provided a lesson and a beating. We have a lot of work to do.”

Democrats also hope to lure millions from George Soros, the billionaire philanthropist and hedge fund titan who sat out 2010. For now, they have a commitment from several rich liberals, including Taco Bell heir Rob McKay, who is backing David Brock’s new venture, American Bridge 21st Century. Brock, a former conservative journalist turned liberal activist, intends to do opposition research and run millions in television ads to influence the presidential and congressional elections.

“Democratic donors are in a fighting spirit. Rove and his allies were virtually unopposed” in the last elections, Brock told the Center. “We’re not going to let that happen again.”

When it comes to the biggest battle of them all, the 2012 presidential campaign, Democrats don’t need to worry quite as much. In 2008, Barack Obama made use of a network of 324 “bundlers,” the well-connected donors who gather donations totaling upwards of $100,000, to raise more than $32 million. Still, members of Team Obama have been hitting the pavement lately to reassure supporters heading into the 2012 race:

[W]ithin days of leaving the White House last month, former deputy chief of staff Jim Messina, who will manage the re-election campaign, was on a nationwide tour. His mission was to reconnect with big bundlers, some of whom have grumbled publicly that they haven’t received enough attention from the White House and have been irked by its tough rhetoric aimed at Wall Street executives.

Messina’s first stop was Manhattan, to soothe anxieties about the administration’s attitudes towards business. On Feb. 3, Messina talked policy and politics with two dozen wealthy Democrats at the swank Park Avenue apartment of Ralph Schlosstein, the CEO of investment banking firm Evercore Partners, and his wife Jane Hartley, a long time Democratic fundraiser.

Messina’s New York meetings were part of a choreographed effort in several big money centers such as Chicago, Los Angeles and San Francisco to improve the president’s standing.

Bundlers suggest that a few of the administration’s pro-business moves since the fall elections have helped calm business jitters: the selection of William Daley, the Chicago-based banker, to be his chief of staff, and backing the extension of the Bush tax cuts, including those for the very rich.