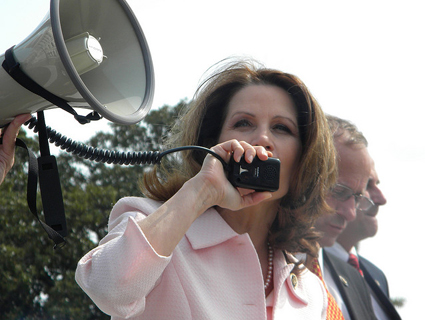 Rep. Michele Bachmann (R-Minn.) has previously said that if she ran for president, the “first thing” she’d do at the first debate would be to present her birth certificate. Not that she would have much of a choice, if the state lawmaker she’s expected to hire to manage her operations in Iowa has his way. Bachmann, who has all-but announced she’s running, is reportedly planning to bring on Iowa state Sen. Kent Sorenson—the author of a recent birther bill—as her political director in the presidential bellwether state.

Introduced in early March, Sorenson’s bill, SB 368, would require “birth certificates to be filed with affidavits of candidacy for presidential and vice presidential candidates.” The legislation, which died in committee, was one of more than a dozen similar pieces of legislation that have been filed since the start of 2009, arising from the conservative conspiracy theory that President Obama was born in Kenya and is therefore not eligible for office. (The President was born in Hawaii and has released a birth certificate, which you can view here). Sorenson has not commented publicly about the legislation and could not be reached for comment.

But that’s not the only conspiratorial view Sorenson shares with his would-be boss. He’s also sponsored SF 347, a bill that would designate silver and gold as legal tender in the state of Iowa. The bill, which asserts that Iowa’s economic downturn has been “caused in large part” by the use of federal reserve notes as currency instead of precious metals, would more or less return the state to a gold and silver standard. Taxes, for instance, would be calculated in silver and gold coins, rather than standard US dollars. In 2009, Bachmann introduced a bill to prohibit the United States from switching to a global currency, which she fears is imminent.

For Bachmannn, who once declared, “I want people in Minnesota armed and dangerous on this issue of the energy tax because we need to fight back,” it’s a good fit. Sorenson is equally combative. As the Iowa Independent notes, Sorenson has previously stated that he was sent to Des Moines by his constituents to “burn this place down. They want me to do battle. And I understand that.”