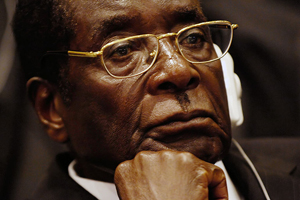 Have the Middle East’s revolutionary stirrings made their way to southern Africa?

Zimbabwe’s president, Robert Mugabe, isn’t taking any chances. On Saturday his government arrested 46 people for attending a lecture titled “Revolt in Egypt and Tunisia: What lessons can be learnt by Zimbabwe and Africa?” The group of students, activists, and trade unionists was charged with treason and could face the death penalty if convicted.

Meanwhile, there are unconfirmed reports that Mugabe has dispatched commandos to the other end of Africa to help Libyan autocrat Muammar Qaddafi repress the popular uprising that is taking over his country. (Read MoJo‘s explainer for more on Libya.)

The two nations have some similarities. The leaders of both have ruled for decades. (In 2008, Qaddafi declared that Mugabe should be president for life.) Both are fond of blaming the West for their problems and hold onto power by torturing and slaughtering their own people. And while Zimbabwe is a more desperately poor nation (in recent years, Qaddafi has aided Mugabe during oil and food shortages), Libya has serious economic problems too, including poor agricultural land and a lack of clean drinking water.

And, similar to the protesters in Libya, Zimbabweans aren’t very happy with their country’s leadership. They voiced their discontent already in 2008, when Movement for Democratic Change leader Morgan Tsvangirai nearly defeated Mugabe in a presidential election. Due to suspicions of voter fraud that denied him an outright victory, Tsvangirai withdrew in protest from the second round of voting. After strong international pressure, the MDC entered into a power-sharing agreement with Mugabe’s party. Tsvangirai now holds the title of prime minister, but Mugabe still controls the country. (Last year, a WikiLeaks revelation that Tsvangirai privately voiced support for international sanctions against Zimbabwe resulted in a treason probe of his own.)

Saturday’s lecture in Zimbabwe’s capital of Harare was given by Munyaradzi Gwisai, who now leads the International Socialist Organization, a splinter group of the MDC. If Gwisai and his listeners were indeed gathering to “organize, strategize and implement the removal of the constitutional government of Zimbabwe…the Egyptian way,” as prosecutors claim, and if they put aside their differences with the MDC, Mugabe could potentially find himself in a predicament similar to Qaddafi’s. Already, there are reports of demonstrations in Cameroon, Gabon, and Mauritania; and as a precaution, Mugabe has joined in Eritrea and Equatorial Guinea’s “total news blackouts” of the Middle East revolts.