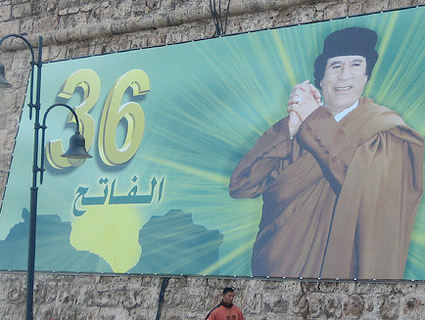 When Libyan Leader Muammar al-Qaddafi is not palling around with a “voluptuous blonde” Ukrainian nurse, he likes to read. Not breezy novels but policy volumes—written by Americans. Well, at least summaries of such books.

A classified 2008 cable sent by the US embassy in Tripoli to the State Department (and released by WikiLeaks) reveals how the embassy came to uncover what it dubbed “Colonel al-Qaddafi’s Summer Reading List.”

In October 2008, an embassy officer met at the foreign affairs ministry with a senior official named Ahmed Fituri, and Fituri pointed out a stack of English-language books on his desk. He explained that he had been ordered by Qaddafi to read “significant” English-language book on American politics, policy, history, and current affairs, and then produce four- to seven-page summaries in Arabic for the Libyan leader. Fituri, who had received a PhD from the University of Michigan, said that he had been handling this task for several years—translating and summarizing six to eight books a year—though Qaddafi’s demand for these reports had diminished in the previous year.

Fituri told the US embassy officer that he was currently summarizing Fareed Zakaria’s The Post-American World. And next up was Thomas Friedman’s The World is Flat 3.0. He noted he had recently translated for Qaddafi an article Secretary of State Condoleezza Rice had written for Foreign Affairs. And in the past year, he had summarized for Qaddafi Zakaria’s The Future of Freedom: Illiberal Democracy at Home and Abroad, Barack Obama’s The Audacity of Hope, and George Soros’ The Age of Fallibility: Consequences of the War on Terror.

Fituri noted that Qaddafi truly enjoyed Zakaria’s The Future of Freedom—that is, the summary of it. But more so than Obama’s book?

Fituri also said that Qadaffi had asked him six months earlier to undertake a similar program for his son, Muatassim Qaddafi, who was the national security adviser. So far, Fituri had merely sent the son copies of the summaries he had prepared for the Libyan leader. But Fituri told the US embassy officer that the head of the External Security Organization, Musa Kusa, had complained to him that Muatassim was “not an avid reader” and had to be prodded to peruse even summaries. Fituri added that many senior government officials did not consider Muatassim to be as intellectually curious as his father or his old brother, who was then pursuing a PhD at the London School of Economics.

So was this useful intelligence for the United States? The cable notes that the downturn in Qaddafi’s reading coincided with a period in which he had reportedly suffered a series of minor strokes. Perhaps here was confirmation of Qaddafi’s diminished health. Moreover, Fituri’s description of Muatassim reinforced the embassy’s view of him: “Fituri’s characterization of Muatassim’s less than enthusiastic embrace of the reading program is no surprise, given what we’ve heard from other contacts, who describe him as a traditional strongman who has focused on consolidating his power-base and pursuing his business interests and social life.”

There was no word on what the Ukrainian nurse liked to read.