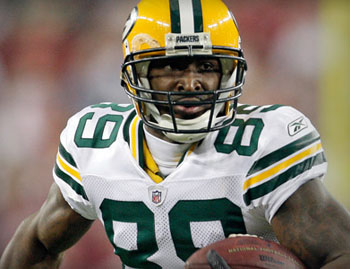 On Sunday, James Jones, who spent much of the first 14 years of his life living in homeless shelters, will play in the Super Bowl. The Green Bay Packers’ wide receiver has done a lot to raise the profile of homelessness through public appearances and his Love Jones 4 Kids Foundation, which helps homeless kids stay in school. But if you’re expecting his made-for-Hollywood saga to provoke any national soul searching amidst all of the halftime hoopla this weekend, you’re probably going to be disappointed. If anything, the big game at Cowboys Stadium in the Dallas-Forth Worth area is shaping up to be a textbook example of how the poor get the shaft.

In December, the Dallas City Council outlawed panhandling in the city’s most prominent tourist areas, including several zones where big Super Bowl events are planned. For several weeks, the the city has been removing homeless people from the areas as it spruces them up for football fans. Anyone who sticks around to ask for handouts from all the high rollers and corporate junketers who’ll be passing through could be fined up to $500.

“There’s a certain sense of irony that you displace your own poor to welcome those who grew up in poverty,” says Neil Donovan, the Executive Director of the National Coalition for the Homeless. “It would be nice if we could make the city as welcome and accommodating to the persistently poor as we do for the wealthy.”

As far as the wisdom of giving to panhandlers goes, Donovan says he’s “probably one of the most conflicted people you will ever meet.” But he staunchly opposes the criminalization of panhandling, calling the decision to give someone else money “something very sacred and personal.” He sees panhandling bans as symptomatic of “a movement towards compassion fatigue.”

Donovan hasn’t asked Jones to speak out against the panhandling ban; he doesn’t think that NFL pros are obliged to make the game stand for anything more than football. (An email that I sent to Jones’ foundation hadn’t been returned as of Thursday morning). But, Donovan added, “it would be highly helpful and very symbolic if something like that were to happen.”