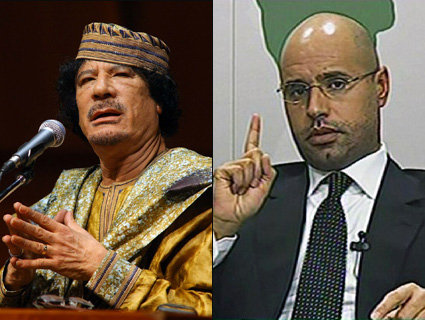 On Sunday, Saif al-Islam al-Qaddafi, the second eldest son of Muammar al-Qaddafi, went on Libyan state television and delivered a rambling, paranoia-soaked fifteen minute speech. Responding to the pro-democracy uprisings in his country—which had been met with violence by the Qaddafi regime—Saif, long regarded as a possible successor to his father, blamed the rebellion on foreign forces, mass media, drug addicts, thugs who’ve escaped from prison, and confused young people. Widely derided, his speech reflected the same lack of awareness characteristic of his father’s addresses—and was something of a warm-up for Muammar Qaddafi’s over-the-top speech on Tuesday.

Saif Qaddafi’s performance was right out of the autocrats’ playbook. It was also totally out of sync with a PhD dissertation he finished in 2007 (with the help of a Harvard-connected consulting firm retained by Tripoli) for the London School of Economics, when he was a doctoral candidate in its philosophy department. The 429-page thesis was entitled, “The Role of Civil Society in the Democratisation of Global Governance Institutions: From Soft Power to Collective Decision Making?” Drawing heavily on the work of American philosopher John Rawls, who formulated a theory of justice and fairness, the work is chockfull of pro-democracy sentiment. Saif Qaddafi’s main point: international organizations and NGOs are central to spreading democracy and their member states must reflect the same dedication to core democratic principles.

Before he again appears on Libyan state TV, Saif might want to review his own work. He can start with this passage:

I adopt the definition of liberal individualism as a political ideal within which liberty is an inalienable right of individuals and a just government must protect individual liberties in its constitution and laws. It is based on the philosophical doctrine that individuals are prior to the collectives they constitute and are entitled to live and act by their own judgment, and so their equal liberty should be restricted only when necessary to secure the equal liberty of all.

Saif was quite serious about the democracy stuff. In his introduction, he wrote, “I shall argue, that today we must strive to adhere to the opening line of the UN Charter, ‘We the peoples.’” Elsewhere, he declared, “Each individual has the right to a fair share of political power.”

His dissertation celebrated “liberal individualism.” There was no mention of a how a government bombing and beating its own people fits into that paradigm. But he contended that when the people of one country are repressed, other nations have a responsibility to act: “The just treatment of individual citizens is not an internal matter only for states; the interests of individuals in despotic, illiberal states is an issue to be addressed by the larger global community.”

Here’s Saif’s recommendation for what other nations should do regarding such rogue states:

This thesis proposes that such regimes could become legitimate targets for intervention because of the violation of basic human rights implied in the denial of such freedoms as voting or free speech.

Translation: foreign countries have the right to use force to protect those living under “non-liberal” governments. Saif noted that outside governments must step in and act if a governments is repressing the inalienable liberty of its citizens. In fact, those foreign governments have a “liberal” responsibility to intervene on behalf of the oppressed.

Over the course of 429 pages, Saif mentioned Libya four times—only once in the context of its deplorable human rights record: “The improved human rights record in Libya is in part due to the campaign by the Qaddafi Foundation and other international human rights NGOs.” (Saif donated UK $1.5 million to the London School of Economics’ Center for the Study of Global Governance through the Qaddafi International Charity and Development Foundation. On Thursday, the LSE announced that it will cut all financial ties with Libya and accept no more money from the foundation.)

On his acknowledgements page, Saif noted that his thesis was made possible, in part, due to the assistance of a “number of experts…especially Professor Joseph Nye” of Harvard. One of the godfathers of the international relations theories of neoliberalism and soft power, Nye read portions of the paper and provided “advice and direction.” Probably not coincidentally, Nye twice visited Libya in 2007 and 2008 as a paid consultant for the Monitor Group, a Boston-based consulting firm then working for the Qaddafi government. He tells Mother Jones that he read one chapter of the dissertation and “found it intelligent.” After the 2007 trip, Nye wrote an essay for The New Republic, extolling Qaddafi’s efforts to clean up his image. Acknowledging the Libyan leader’s abominable human rights record, Nye still saw hope for him:

Where once he had tried to bully and even overthrow governments to his south, now he is hosting peace talks on Darfur. Where once he sought weapons of mass destruction, now he has abandoned his nuclear program…Qaddafi, in other words, seems to have become interested in soft power—the art of projecting influence through attraction rather than coercion… And the fact that he took so much time to discuss ideas–including soft power—with a visiting professor suggests that he is actively seeking a new strategy.

In The New Republic piece, Nye noted that he had visited Libya “at the invitation of the Monitor Group.” He did not disclose that he had been there as a paid consultant for this firm—a relationship he acknowledged in an email to Mother Jones. That means The New Republic published an article sympathetic to Qaddafi written by a notable academic on the payroll of a company hired by Qaddafi to boost his standing in the United States.

The Monitor Group, which is connected to leading professors at the Harvard School of Business, sent several prominent foreign policy thinkers (in addition to Nye) to Libya to meet with the Libyan leader, including neocon Richard Perle, another paid adviser for Monitor. This was part of its paid-for-by-Tripoli effort to rehabilitate Qaddafi. And as Saif Qaddafi wrote in his acknowledgements, the group also helped him conduct research for his dissertation—raising the possibility that this thesis was another component of the Monitor Group’s makeover campaign for the Qaddafi regime. The consulting firm pocketed $3 million a year for its pro-Qaddafi endeavors

In the conclusion of his thesis, Saif hammered home an “idealist” approach to global governance based on “a global theory of justice and cosmopolitan principles.” If foreign governments were to act in accordance with this Qaddafi Principle, they’d now be considering what actions to take to support the protesters in Libya, to end the mayhem and repression there, and to put Saif Qaddafi out of a job.