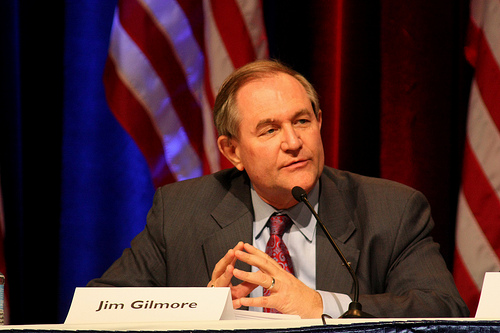 Here at CPAC, the annual three-day shindig for the conservative movement, Republican bigwigs rarely, if ever, take public shots at their fellow party members eyeing a run for the presidency. But one prominent GOPer, former Virginia governor Jim Gilmore, blasted many of the potential Republican candidates, calling them “clowns” who engage in “political theater” and who “place more emphasis on flamboyance than they do on thinking and policy and trying to make more serious proposals.”

Gilmore, a former Virginia attorney general and long-shot presidential candidate in 2008, now runs the conservative Free Congress Foundation think tank, and he was moderating a panel here at CPAC titled “The End of Productivity: The Growing Tax Burden.” His criticism of the 2012 presidential field came during a question-and-answer period at the end of the seminar. Asked by an audience member whether he thought the 2012 contenders have what it takes to turn around the country, Gilmore had this to say:

Here at CPAC, you have seen a lot of people running for president. I guess you’ve seen seven or eight. I made my personal list; it was 23 and I stopped counting. Some of them are real, some of them statements, some of them clowns. And that is the reality.

The fact is, many of the people running for president are running for their own self-interest. Because they want to be something.

I caught up with Gilmore after the panel and asked if he really meant to call certain GOP presidential hopefuls “clowns” that care more about themselves than the country. “Yeah, yeah,” he eagerly replied. “Some people place more emphasis on flamboyance than they do on thinking and policy and trying to make serious proposals. It falls to think tanks like us and others, Heritage and people like that, that actually offer decent proposals.” Gilmore paused a beat, then added, “And you know what, political theater’s OK. But when it’s all theater, the public suffers.”

I pressed Gilmore on which GOP candidates here at CPAC he specifically thought were clowns. He smiled, looked at my press pass, then said, “They’re very smart people, your readers. I’m sure they can figure it out.”