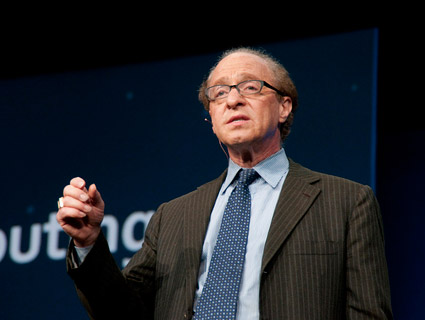 Author, inventor and futurist Ray Kurzweil famously and accurately predicted that a computer would beat a man at chess by 1998, that technologies that help spread information would accelerate the collapse of the Soviet Union, and that a worldwide communications network would emerge in the mid 1990s (i.e. the Internet).

Most of Kurzweil’s prognostications are derived from his law of accelerating returns—the idea that information technologies progress exponentially, in part because each iteration is used to help build the next, better, faster, cheaper one. In the case of computers, this is not just a theory but an observable trend—computer processing power has doubled every two years for nearly half a century.

Kurzweil also believes this theory can be applied to solar energy. As part of a panel convened by the National Association of Engineers, Kurzweil, together with Google co-founder Larry Page, concluded that solar energy technology is improving at such a rate that it will soon be able to compete with fossil fuels.

I caught up with Kurzweil when he was in New York promoting a new documentary about his life to ask him about his optimistic views on the usually gloomy subject of energy and climate change.

Lauren Feeney: You have made a prediction about the future of solar energy….

Ray Kurzweil: One of my primary theses is that information technologies grow exponentially in capability and power and bandwidth and so on. If you buy an iPhone today, it’s twice as good as two years ago for half that cost. That is happening with solar energy — it is doubling every two years. And it didn’t start two years ago, it started 20 years ago. Every two years we have twice as much solar energy in the world.

Today, solar is still more expensive than fossil fuels, and in most situations it still needs subsidies or special circumstances, but the costs are coming down rapidly — we are only a few years away from parity. And then it’s going to keep coming down, and people will be gravitating towards solar, even if they don’t care at all about the environment, because of the economics.

So right now it’s at half a percent of the world’s energy. People tend to dismiss technologies when they are half a percent of the solution. But doubling every two years means it’s only eight more doublings before it meets a hundred percent of the world’s energy needs. So that’s 16 years. We will increase our use of electricity during that period, so add another couple of doublings: In 20 years we’ll be meeting all of our energy needs with solar, based on this trend which has already been underway for 20 years.

People say we’re running out of energy. That’s only true if we stick with these old 19th century technologies. We are awash in energy from the sunlight.

Feeney: In his recent State of the Union address, President Obama set a goal of running the country on 80 percent renewable energy by 2035, which is a little bit less ambitious than what you’ve suggested. Are you satisfied with the goal set by the president?

Kurzweil: 2035 is 24 years. I am saying we can meet all our energy needs from solar in 20 years. It’s actually pretty consistent with what I’m saying.

Feeney: You have a very optimistic view of the future; eccentric, even. You believe that eventually we’ll be able to live forever, and maybe even bring people back from the dead. How would that growth in population affect the environment? A lot of people are afraid of overpopulation as one of the major factors in climate change.

Kurzweil: We will be extending the human life expectancy; in fact, we have done that already. Human life expectancy was 37 years in 1800, 48 in 1900; it’s now pushing 80. But this is going to go into high gear now that health and medicine has changed. It used to be hit or miss. We’d just find things—medicine was just a kind of an organized set of ideas that we discovered accidentally. We now have the actual means of understanding the software of life and reprogramming it; we can turn genes off without any interference, we can add new genes, whole new organs with stem cell therapy. The point is that medicine is now an information technology—it’s going to double in power every year. These technologies will be a million times more powerful for the same cost in 20 years.

However, the same technologies that are going to extend life and nudge up the biological population are also going to expand the resources. We just talked about energy, because we are running out of it, but actually we are awash in energy. We are awash in water—pun intended. Just most of it is dirty and polluted. And we know how to convert it, today, but it takes energy, which is why it’s expensive. Once energy is inexpensive, we can create water.

There is a whole set of new food technologies. We are going to go from this revolution that happened 10,000 years ago of horizontal agriculture to what’s called vertical agriculture, where we grow plants, fruits, vegetables and meat in computerized factories by artificial intelligence; hydroponic plants tended by intelligent robots to create fruits and vegetables, in-vitro cloned meats, basically just cloning the part of the animal that you want to eat, which is the muscled tissue. There is no reason to create a whole animal to get to the parts that we want to eat.

The point is that the same technologies that are going to increase human longevity are also going to expand the resources and ultimately make them very inexpensive.

Feeney: You talk about what will happen instead of what might happen. But there are so many obstacles to dealing with climate change—political gridlock, consumer apathy. Are you concerned that these things might not happen because of obstacles like these?

Kurzweil: My main thesis, which I call the law of accelerating returns, is not affected by the kind of things you are referring to. The exponential growth of computation is measured in many different ways continued through the entire 20th century, completely unaffected by the little things like World War I and II or the Great Depression. It was not affected at all by the recent economic downturn. This exponential growth of solar energy has continued through thick and thin.

As the cost per watt of solar falls significantly below coal and oil, people are going to go to that for economic reasons. It won’t be a political issue.

Feeney: A lot of climate scientists say that we have about 10 years to turn the situation around, otherwise we’re going to hit this tipping point and we are all doomed. So you think we’re going to make it?

Kurzweil: Even if those timelines were correct, there will be quite a transformation within 10 years and certainly within 15 or 20 years. The bulk of our energy will be coming from these renewable sources. So, I think we have plenty of time. I think we can make it to the point where these renewables are taking over. And I think there are reasons besides climate change to move away from fossil fuels—that whole oil spill, remember that, that’s not climate change, that’s just pollution. But I don’t see a disaster happening before we can get there because it is pretty soon at hand.

This interview was produced by Need to Know as part of the Climate Desk collaboration.