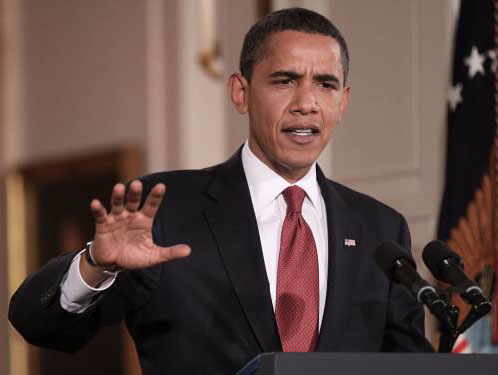 When the Supreme Court handed down its controversial Citizens United decision, President Barack Obama ripped the high court’s ruling for giving “a green light to a new stampede of special interest money in our politics.” But while denouncing the destruction of the nation’s campaign finance laws, Obama has done nothing to bolster the dysfunctional agency responsible for enforcing what remains of them.

Since mid-2008, the Federal Election Commission has epitomized political gridlock. Crackdowns by the bipartisan FEC have plummeted. Now, the advocacy group Public Citizen is plotting a “full court press,” demanding that President Obama begin to fix the FEC by ditching its Republican ringleader, Donald McGahn.

Public Citizen’s pressure comes at a pivotal moment for the agency. In April, five of the commission’s six members will be working as holdovers up for replacement, their official six-year terms expired. Craig Holman, a lobbyist for Public Citizen, says his organization will push for Obama to replace those holdovers with picks of his own. “President Obama is not putting any effort into fixing the FEC,” Holman says.

Obama should start, Holman says, by dumping McGahn, the shaggy-haired, guitar-playing commissioner whose official term expired nearly two years ago. (McGahn did not respond to a request for comment.) McGahn’s tenure at the FEC is Exhibit A for what happens when ideology supplants the letter of the law, critics say. A George W. Bush nominee, McGahn was named a commissioner in July 2008 (he was asked to fill a partially completed term). Since then, the FEC has been gripped with paralysis. According to Holman, deadlocked enforcement votes—meaning no action was taken—averaged 1 percent between 2003 and 2008; they spiked to 16 percent in 2009 and 11 percent in 2010. McGahn and the other GOP commissioners “see no obstacle to placing their own ideology ahead of what the federal law reads,” Holman says.

McGahn’s opposition to campaign finance regulations isn’t surprising, given his background. The New Jersey native previously fought the FEC as counsel for former House majority leader Tom DeLay (R-Texas), who resigned his seat months after a Texas grand jury indicted him for conspiring to funnel illegal campaign contributions into state political races. (In January, DeLay was sentenced to three years in prison.) McGahn also fought landmark political reforms such as the McCain-Feingold Act, which banned unregulated “soft money” contributions (funds given to a political party as a whole) by national party committees, as well as issue advertisements during campaigns, and was upended by the Citizens United decision.

The FEC’s three Republican commissioners, led by McGahn, have repeatedly blocked efforts to crack down on outside spending groups and political campaigns that have violated the law. In 2008, for instance, staff investigators at the FEC found that congressional campaign of California Democrat A.J. Sekhon had failed to disclose a whopping 90 percent of campaign donors who’d given more than $200. The violation was obvious; the candidate willingly signed a plea bargain and cut a check to cover the fine for the mistake. That’s when McGahn and the other two Republican commissioners intervened. Not only did they reject the plea bargain, they threw out the case altogether, despite unanimous agreement by their three Democratic counterparts. The check was returned, the case forgotten.

Citing that story, Fred Wertheimer, president of the campaign finance reform group Democracy 21, describes the FEC under McGahn’s leadership as “completely dysfunctional in ways that no other agency I know of is.” Wertheimer adds, “You can go back and you will see, in case after case after case, the professional staff recommends something, the Democrats support it, but then the commission doesn’t act.”

Not everyone sees McGahn and his Republican colleagues as ideological interlopers with no regard for the laws on the books. Sean Parnell, president of the Center for Competitive Politics, a group that backs fewer regulations in American elections, says the belief that the FEC’s three GOPers merely act unison to block the commission “dramatically oversimplifies” the situation. Instead, Parnell says, McGahn and his counterparts are reacting to recent legal decision limiting the federal government’s authority on campaign spending. “The commissioners recognize the Supreme Court’s curbs on the authority to regulate campaign finance laws and say, ‘we can’t go down this path'” with enforcement, Parnell says.

If Obama does decide to replace McGahn or any other commissioner, he will face a heated nomination battle in the Senate, which must approve the president’s pick. Standing in the president’s way is Senate minority leader Mitch McConnell (R-Ky.), a long-time opponent of campaign finance law. It was McConnell, critics say, who deserves the credit for placing three stalwart conservatives on the FEC who have forced so many gridlocked votes in recent years. If Obama seeks to replace one of the FEC’s Democrats with a nominee who supports tougher restrictions, the president will run into a buzz saw in the Senate. “Mitch McConnell is really the whole key to the FEC,” Holman says. “He realized several years ago that a very effective way to minimize the effect of federal laws is to undermine the regulator.”

But campaign finance reformers are ready for that fight. The alternative, they say, is a mostly useless federal agency that allowed to political money spigot to be opened wide. “The Federal Election Commission is a national scandal today,” says Fred Wertheimer. “We have no enforcement of the campaign finance laws.”