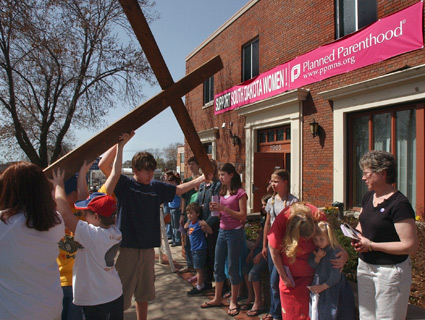 Just when abortion rights supporters thought they had beaten a controversial bill they believe would legalize the killing of abortion providers, it has cropped up again—this time in a more expansive form that has drawn the concern of law enforcement officials.

Last week, South Dakota’s legislature shelved a bill, introduced by Republican state Rep. Phil Jensen, which would have allowed the use of the “justifiable homicide” defense for killings intended to prevent harm to a fetus. Now a nearly identical bill is being considered in neighboring Nebraska, where on Wednesday the state legislature held a hearing on the measure.

The legislation, LB 232, was introduced by state Sen. Mark Christensen, a devout Christian and die-hard abortion foe who is opposed to the prodedure even in the case of rape. Unlike its South Dakota counterpart, which would have allowed only a pregnant woman, her husband, her parents, or her children to commit “justifiable homicide” in defense of her fetus, the Nebraska bill would apply to any third party.

“In short, this bill authorizes and protects vigilantes, and that’s something that’s unprecedented in our society,” Melissa Grant of Planned Parenthood of the Heartland told the Nebraska legislature’s judiciary committee on Wednesday. Specifically, she warned, it could be used to target Planned Parenthood’s patients and personnel. Also testifying in oppostion to the bill was David Baker, the deputy chief executive officer of the Omaha police department, who said, “We share the same fears…that this could be used to incite violence against abortion providers.”

Baker’s concern is well-grounded: Abortion providers are frequent targets of violent attacks. Eight doctors have been murdered by anti-abortion extremists since 1993, and another 17 have been victims of murder attempts. Some of the perpetrators of those crimes, including Scott Roeder, the murderer of Wichita, Kansas, abortion provider Dr. George Tiller, have attempted to use the justifiable homicide defense at their trials. Several of the witnesses at Wednesday’s hearing cited Tiller’s murder as a case where a law like the one Christensen introduced could have come into play.

For his part, Christensen insisted that his measure is not intended to target abortion providers. Like Jensen, Christensen claimed that his bill is merely meant to allow pregnant women to defend their unborn children without fear of prosecution. “LB 232,” he said, “is really nothing more than an attempt to make sure a pregnant woman is not unnecessarily charged with a crime for using force to protect her unborn child from someone who means to bring harm to her unborn children.”

But, as other lawmakers pointed out during the hearing, Christensen’s bill, as currently written, would not only apply to pregnant women but to anyone who attempted to prevent harm to a fetus. “I think it opens the door to something unintended,” said state Sen. Steve Lathrop. “I don’t think you came in here intending to make those who provide abortions a target of the use of force,” he told Christensen, “but I think it may unintentionally do that or at least provide somebody with an argument that they were justified in that.”

Not everyone is sure that the law’s potential use in a case of abortion-related murder was unintentional. “If they wanted it narrow, they should have drafted it that way, and they did not,” Alan Peterson, a lobbyist with the ACLU of Nebraska who testified at the hearing, told Mother Jones. “So I have reasonable suspicion that the intent was at least to create a possible broad defense for attacks on abortion providers.”

“I don’t know how anyone knows my intent,” Christensen fired back in an interview with Mother Jones.

Christensen and proponents of his bill, including the anti-abortion groups Americans United for Life and Family First, argue that concerns that the measure would legalize violence against abortion providers are overblown. They say that since abortions are legal in Nebraska, the killing of an abortion doctor would not be permissible under Christensen’s law. (Proponents of South Dakota’s bill made a similar case.) But Peterson disputed this interpretation. He said the existing self-defense statute that Christensen’s bill would amend is “not limited to situations where something is going on that’s unlawful. It says the person who claims the defense believes that there’s something unlawful. That’s a subjective standard.” A standard, he added, that might allow the killer of an abortion provider to use Christensen’s law, if passed, to get away with murder.

Christensen, who was first elected to the state legislature in 2006, has a history of advancing eyebrow-raising legislation. “Controversial bills don’t bother me at all,” he once said. Recently, he has pushed a measure that would allow teachers and other school officials to carry concealed weapons on school grounds. And in January, he introduced a birther-style bill that would require presidential and vice presidential candidates to provide a “certified copy” of their “original long-form” birth certificates in order to be listed on the ballot in Nebraska. He’s also floated a bill, similar to one introduced by Jensen in South Dakota, which would prohibit Nebraska’s courts from basing their rulings on foreign law—a measure that’s part of a quixotic nationwide right-wing campaign to ban Sharia law.

Christensen said that he was unaware that a justifiable homicide bill similar to his had been introduced in South Dakota, though it recently caused a national outcry after the possible implications of the legislation were reported by Mother Jones. Following Wednesday’s hearing, where lawmakers and others highlighted the potential dangers of his bill, Christensen said that he’s prepared to revise the legislation and “narrow it down to just protecting mother and unborn child.” Then “it’ll be noncontroversial and we’ll be ready to go.”

He added, “I do not believe in killing people for undue reason.”