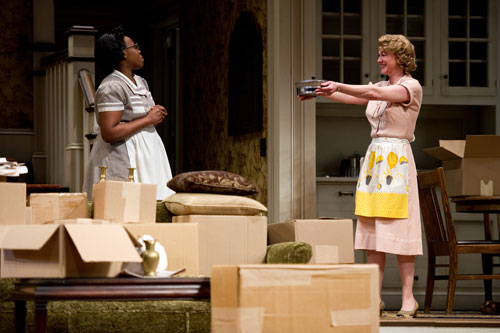 If you think that race relations in your urban hipster enclave have much improved since the 1950s, you probably haven’t seen Clybourne Park, a hilarious, devastatingly spot-on play by Bruce Norris that has been making audiences squirm in New York, London, and Washington, DC. At moments during Clybourne Park’s West Coast premiere in San Francisco last week, some people laughed and others scowled, as one would expect from a play that mercilessly shreds Obama-era pretensions to social enlightenment.

Expertly directed by Jonathan Moscone at San Francisco’s American Conservatory Theater, Clybourne Park juxtaposes two scenes in the same Chicago townhouse across the span of a half century. In the first, a war-scarred white family is selling the house, which looks like the set to a cheery postwar sitcom, to an African-American couple over the objections of the all-white neighborhood’s Rotarian booster (theater buffs will notice this as a re-imagining of “A Raisin in the Sun,” a famous 1959 play about race). The second act shows the same house bare and mouldering as two white bobos (Steve and Lindsey), who want to replace it with a modernist tower, square off against black neighbors (Kevin and Lena), who view themselves as defenders of the neighborhood.

That’s when things really get interesting. The PC blather deployed by both sides—the acknowledgements of past injustices, the oblique claims to victimization, the emphatic repetitions of “I hear you”—thinly veils the same jurassic territoriality of the ’50s. A rhetorical arms race has complicated and in some ways deepened the old divisions, with matters of “taste” substituting for race and class in an an ostensibly post-racial world.

Even the well-educated, well-off, obviously liberal San Francisco theater audience had trouble navigating these shoals at times. There were jokes about deaf people, gay people, black men, and white women that may or may not have been funny. (Why are white women like tampons? “They’re both stuck up cunts!”). There was the moment when several people in the audience cheered as Steve tried to find common cause with Kevin by condemning the War in Iraq, only to learn that Kevin’s minivan was plastered with three “support our troops” magnets, one for each of his relatives fighting overseas (statistically, African-Americans are overrepresented in the armed forces). But in other ways Kevin is a classic latte liberal.

Clybourne Park ends by suggesting that neither side in the gentrification wars really pays enough heed to the true nature of the history that it enshrines. I hear you, Bruce Norris. I totally hear you.