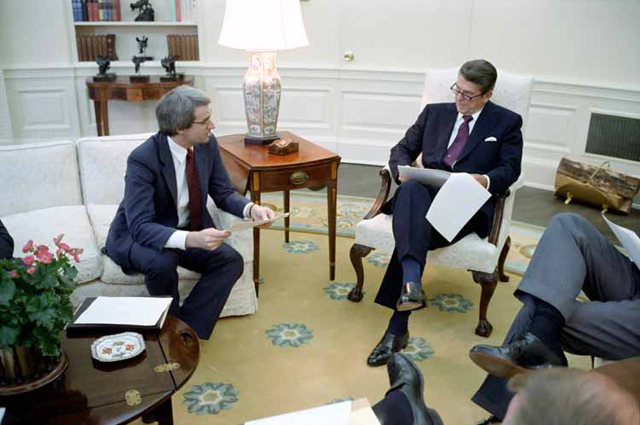 Photo Courtesy of the Ronald Reagan Presidential LibraryWhen conservative politicians want to take a rain check on criticizing a member of their own party, they like to invoke Reagan’s 11th Commandment: “Thall shalt not speak ill of a fellow Republican.”

This is, of course, frequently ignored. But it’s not the only commandment that’s subject to selective enforcement—that whole bit about “false idols,” for instance. For the better part of three decades, conservative policy-makers have revered a president who never really existed: a tax-cutting, deficit-fighting, savior who starved the beast of big government. Today’s budget hawks alternatively cite Reagan as evidence that deficits don’t matter, and then again as evidence that they do.

But don’t take it from me; take it from the architect of the Reagan tax cuts himself: former budget director David Stockman (top, left). “[T]he simplistic and reckless idea that the way to stimulate the economy is to cut taxes anytime, anywhere, for any reason, became embedded [in the GOP],” Stockman told MoJo‘s David Corn. “It has become a religion, it has become a catechism. It’s become a mindless incantation.”

So where did Republicans go wrong—and how can they make things right? Stockman’s prescription for fixing the economy might come as a bit of a shock, not the least of all to Congressional Republicans. Check out David’s interview with Stockman from our March/April issue.

And while you’re at it, here’s a bonus long-read for your lunch break: Bill Greider’s 1981 portrait of the budget director as a young man, in The Atlantic. I was going to describe it as a “fascinating look at the work of a budget director,” and realized that makes it sound incredibly boring, which it’s not; really, what’s remarkable is Stockman’s candor even then. As he told Greider, “None of us really understands what’s going on with all these numbers.”