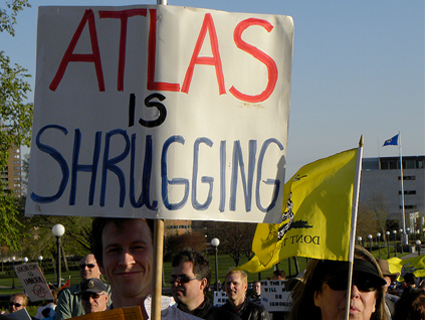 You’ve waited patiently—oh, well, probably not. If you’re excited about the filmic adaptation of Ayn Rand’s magnum opus, Atlas Shrugged, you’re probably a tea partyin’, Obama-hatin’ “individualist” whose many interesting qualities don’t include coolness, composure, or constancy. AS tells (in thousands of plodding pages) the epic story of a post-depression, collectivized USA in which the main movers of society—e.g., steel magnates, playboys, and pirates—drop off the grid to form a rural libertarian paradise, then storm the Oval Office to impose their benevolent, preachy coup on a commie president. Rand’s novel is simultaneously a revolutionary rethinking of symbolic logic and a timeless meditation on the unbearable lightness of being a solipsistic prick.

This thing’s been about to happen for a long time. At one point, Brangelina were rumored to star in a blockbuster, big-budget production worthy of Rand’s cultish literary helots. But sadly, it wasn’t meant to be: The trailer for Atlas Shrugged: Part I (of three) dropped today—see below—and judging from the cast and the production values, this thing is more Left Behind than Lord of the Rings. Still, you may recognize some cheery faces, like the guy from Ugly Betty and this dude, who played an Al Bundy-like patriarch in a short-lived ’90s Fox sitcom that starred Bobcat Goldthwait as “Mr. Floppy.“

Excited yet? How long do you have to wait for this hot mess of anti-tax art, you ask? ANARCHO-CAPITALISM IS DROPPING ON TAX DAY, 2011! April 15: Coming straight to a Netflix account near you! Formulate your drinking-game rules now: Take a shot every time a character says “self-sacrificer” or “bromide”! Just don’t use “Who is John Galt?” as your drinking phrase; you’ll be dead by the start of the second act.