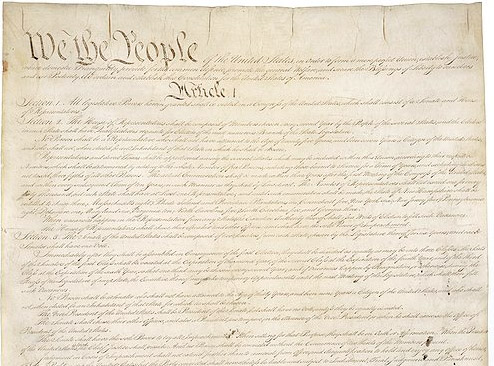 The conservative fetish with the Constitution came to a new apex on Thursday, when lawmakers read the document aloud on the House floor—not quite in its entirety—at the behest of the new Republican majority. But even as they lavished praise on the venerated document, some Republicans were quick to ennumerate the ways they’d love to change it—as well as radically reinterpret its provisions.

Rep. Phil Gingrey (R-Ga.) was slated to read out one of the last sections of the Constitution, but he was bumped off after other lawmakers had already finished the job. (Most of the passages weren’t divvied up beforehand.) Had he had his druthers, however, Gingrey said he would like to have read the 14th Amendment—precisely because he wanted to change the way it was interpreted. The amendment, Gingrey reminded reporters, is about “birthright citizenship and anchor babies.” He added: “I would have liked to have read Section 5 of the 14th amendment—that gives us, the Congress, the right to make changes with regard to that.” Gingrey, in fact, has already become a co-sponsor of an anti-birthright citizenship bill, introduced on Wednesday by Rep. Steve King (R-Iowa), that opponents have quickly described as unconstitutional. (Other right-wing opponents of birthright citizenship have demanded full repeal of the 14th Amendment.)

Rep. Bob Goodlatte (R-Va.) did get his chance to step up to the podium, and he got a choice selection at that: He read the 10th Amendment limiting federalism, which right-wing activists frequently seize upon in their battles against Big Government. But Goodlatte, too, had his qualms with the sacred text. After Thursday’s reading, the Virginia Republican told reporters he had introduced not one but two balanced budget amendments: one that originally passed the House under then-Speaker Newt Gingrich’s Contract with America—but failed in the Senate—and another that would reduce the percentage of US gross domestic product that the federal government is constitutionally allowed to spend.

The GOP has long blasted Democrats for trying to mess with the intentions of the founding fathers—a sentiment that helped motivate Thursday’s dramatic reading. But Republicans certainly don’t have any qualms about charging ahead to demand drastic changes they’d like to see in the way the Constitution has been interpreted—and in the document itself.