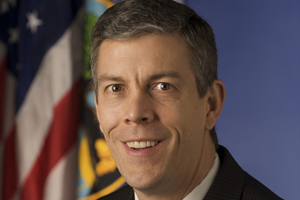 Here’s Education Secretary Arne Duncan on the widely expected overhaul of the nine-year-old No Child Left Behind Act, formally called the Education Elementary and Secondary Education Law, as quoted by AP:

“Everyone I talk to really shares my sense of urgency that we have to do better for our children. We’re fighting for our country here.”

What’s he talking about? AP reports:

“Duncan has worked with lawmakers of both parties over the past two years to lay the groundwork for a rewrite.” The new law “[W]ould ease many testing requirements, put a new focus on teacher performance and the lowest-performing schools, and replace proficiency requirements with loftier goals of boosting college graduation rates.”

Now that Republicans control the House and have more power in the Senate, some observers are saying that education reform might be among the few areas where Obama can accomplish something this year. That’s because unlike immigration, tax reform, or climate change legislation, most Republicans actually support Obama’s education reform ideas (except for tea partiers, who want the Department of Education eliminated outright).

Obama is expected to outline his education reform plans in his State of the Union speech next week. Fasten your seat belts.