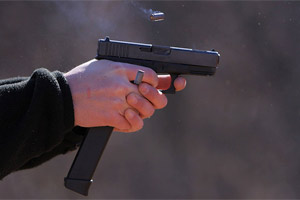 After the shooting spree in Tucson, a simple message appeared on the website of the nation’s premier gun-rights booster, the National Rifle Association: “Our thoughts and prayers are with the victims of this senseless tragedy. We join the rest of the country in praying for the quick recovery of those injured.” Asked to comment on gun-control legislation floated since the massacre, the NRA sent a similar statement to Mother Jones: “At this time anything other than prayers for the victims and their families would be inappropriate.” Was the powerful gun lobby standing down amid calls for stricter gun laws? Nope, it was merely prepping for what could be a fierce legislative fight.

In recent days, the NRA and other pro-gun groups have sought to portray lawmakers who’ve used the Tucson shootings to advance gun-control measures as craven opportunists who are trying to exploit a national tragedy for political gain. Their primary target is Rep. Carolyn McCarthy (D-N.Y.), who will reintroduce a bill that would revive language from 1994’s now-expired Federal Assault Weapons Ban. Specifically, the bill bans high-capacity magazines that hold more than 10 rounds (the alleged Tucson shooter’s held 30). Sen. Frank Lautenberg (D-N.J.) has announced he’ll introduce companion legislation in the Senate. Reps. Peter King (R-N.Y.) and Gary Ackerman (D-N.Y.) have offered up their own bills addressing different gun-safety issues.

“When you’re working on something for 14 years, I don’t think that’s taking advantage of the situation,” says McCarthy.

It’s clear why the NRA would try to keep a low profile following Tucson. Coming out with its proverbial guns blazing in favor of unfettered firearms rights wouldn’t have looked good following the tragedy. But it wasn’t long before the group grew more vocal about what it views as a politically motivated onslaught on the Second Amendment. The NRA’s lobbying arm, the Institute for Legislative Action (NRA-ILA), has plowed forward with an aggressive campaign to block any new gun legislation. In a letter this week to lawmakers, NRA-ILA executive director Chris Cox said that the high-capacity clips McCarthy is targeting are “standard equipment” for self-defense, and he highlighted the political-opportunism meme: “Even while our country was respecting the heartache of the people of Tucson and waiting for the full facts of the case, anti-gun activists were renewing their push for more gun control laws.”

The Gunowners of America (GOA), a more conservative wing of the gun lobby, has pushed a similar line. “Already, we see the pattern we witnessed in Columbine, with liberal politicians flocking like vultures to pick political advantage from a tragedy,” it griped in a recent statement. The group added: “New York Congressman Carolyn McCarthy has already announced her intention to suck political benefit from the shootings by introducing anti-gun measures.”

As GOA’s top lobbyist John Velleco told Mother Jones, “When something like this happens, a horrific shooting, we have never gone out and said, ‘Oh, let’s pass a law for this, that, or the other thing.'” Yet some of the nation’s most important legislation has followed national traumas, receiving political momentum that would have been absent otherwise.

The White House has yet to come out in support of McCarthy’s measure or other gun-control measures currently under consideration. On Thursday, White House Press Secretary Robert Gibbs evaded questions about the administration’s position on any new gun-related legislation. President Obama, meanwhile, didn’t directly address the assault-weapons ban or any gun-control measure during his speech in Tucson. The message of the White House’s noncommittal stance seems clear: While gun regulation may be good policy, the president realizes that enraging gun owners is bad politics.

McCarthy, whose husband was one of six people gunned down on a Long Island commuter train in 1993, brushes off attacks by gun-rights groups accusing her of playing politics with a tragedy. “Hopefully, I can convince people that this is the right thing to do, not just because of this particular shooting, but because of these high-capacity clips,” she says. “When you’re working on something for 14 years, I don’t think that’s taking advantage of the situation.” She adds, “Shootings like this bring public awareness, but I would’ve reintroduced it, anyhow.”