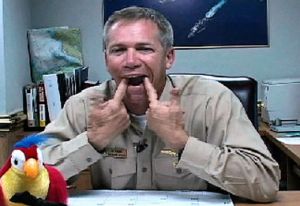 Screenshot courtesy of US Navy

…Aaaand we have closure, kinda sorta. The Navy fired Captain Owen Honors, skipper of the USS Enterprise, for those imprudent “morale” videos he cut a few years back as the ship’s second in command. Spencer Ackerman at Danger Room sums up what was at stake for an eminently qualified combat commander whose sense of humor wasn’t in the service’s spirit of honor, courage, and commitment.

I still have one unanswered question, which is: Where was the ship’s old skipper, Captain Lawrence Rice, when his right-hand man was going all Coco on the camera (minus the funny, plus sexism and homophobia)? Rice, the one man who could have counseled Honors on prudence, apparently never did…perhaps because he was a member of the Navy’s last total fraternity: the all-male Naval Academy class of ’79 (“last class with balls,” they call themselves). And now Rice is an admiral, assisting former Iraq commander Gen. Ray Odierno in forming military-wide joint startegy and policy. Nothing succeeds like excess.

Not much else to add here, except that Honors’ defrocking has been an interesting learning lesson and opener of dialogue on what all Americans, liberal or conservative, want their military to be. Regardless of where you sit on the political spectrum, you probably expect service members not only to be professional about their military missions: You expect them as well to uphold some sort of moral example to their shipmates and subordinates. My previous post on Movie Night-gate led to a lively discussion between commenters who have very different visions of an officer’s moral responsibilities. And as Ackerman and Foreign Policy‘s Tom Ricks recently pointed out, the US has sort of slipped away from its longstanding tradition of holding admirals and generals (and captains and colonels) to account for failings of all sorts. So, even if you’re hopping mad at the “politically correct” brouhaha surrounding Honors’ sophomoric video scripts, enjoy the fact that we as a society are again talking about what is and isn’t acceptable behavior in the commander of a nuclear-powered floating airbase.