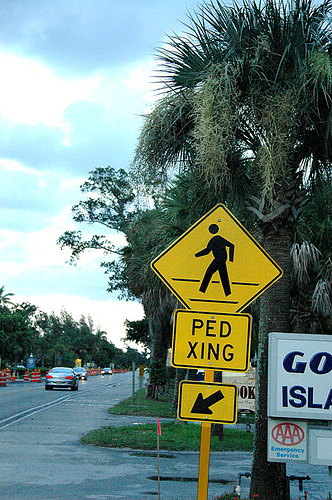 A new report from the Governor’s Highway Safety Association is getting lots of press today because some reporters, rather bizarrely, have tried to blame the increase in pedestrian deaths in 2010 on First Lady Michelle Obama’s anti-obesity campaign.

Yes, you read that right. See the original piece in The Examiner and the followup in the Daily Caller.

The reporters in question posit that perhaps the increase in the number of pedestrians struck by cars last year, after four years of decline, is because people are out exercising more, choosing to walk when possible instead of hopping in the car. TBD has a good post in which the GHSA’s executive director, Barbara Harsha, explaining that she never said that at all. The group isn’t sure exactly what caused the uptick in deaths—and they certainly can’t pin it on Michelle Obama’s “Let’s Move” initiative.

And as TBD’s Dave Jamieson aptly concludes, “If the ‘Let’s Move’ campaign is so effective that herds of inexperienced joggers are suddenly getting run over, then we need to put Mrs. Obama in charge of more nationwide initiatives, starting with the economic recovery.”

But here’s what blows my mind in all the buzz: It all blames those who have the audacity to travel by foot. They’ve been brainwashed by the First Lady, and they’re too absorbed in their cell phones and iPods to get out of the way of oncoming traffic. There seems to be no attention to those doing the running-over. The report actually notes that “both drivers and pedestrians are increasingly distracted by cell phones and other portable electronic devices,” while stopping short of attributing blame for the increase to any one cause.

The real problem may be that we just don’t have transportation infrastructure designed for those traveling by foot. “Unfortunately for pedestrians, many roadways are designed for motor vehicles,” the report explains, citing this anecdote from the state agency in Nevada:

Like many other places in the southwest, the road network in Clark County consists of arterials that are designed as six lanes with intersections jumping to eight lanes. In urban area that bisects freeways or beltways, intersection can be as large as 12 lanes! Streets are flat with wide lanes that are comfortable for speed and there are few places marked for pedestrians to cross the street. On major arterial streets the norm is to have nowhere for up to a mile stretch for pedestrians to safely cross the street.

The report’s recommendations focus on this problem—not on, say, convincing the public not to exercise. Suggestions include consideration of pedestrians in the state’s highway safety plan, installing pedestrian crosswalks and signals that would “reserve roadway space and time for pedestrians,” and strengthening state laws to require vehicles to stop—rather than just yielding—to pedestrians in crosswalks. Those might actually prevent some pedestrian deaths and obesity.