Mother Jones photo editor Mark Murrmann is currently in Haiti, accompanying reporter Mac McClelland as she revisits the country one year after the earthquake. He’s been sending back photographs as he shoots them. Here’s a cut of his images of the commemorations and protests, the scramble to rebuild and survive, and children growing up without parents in a place with a precarious future. 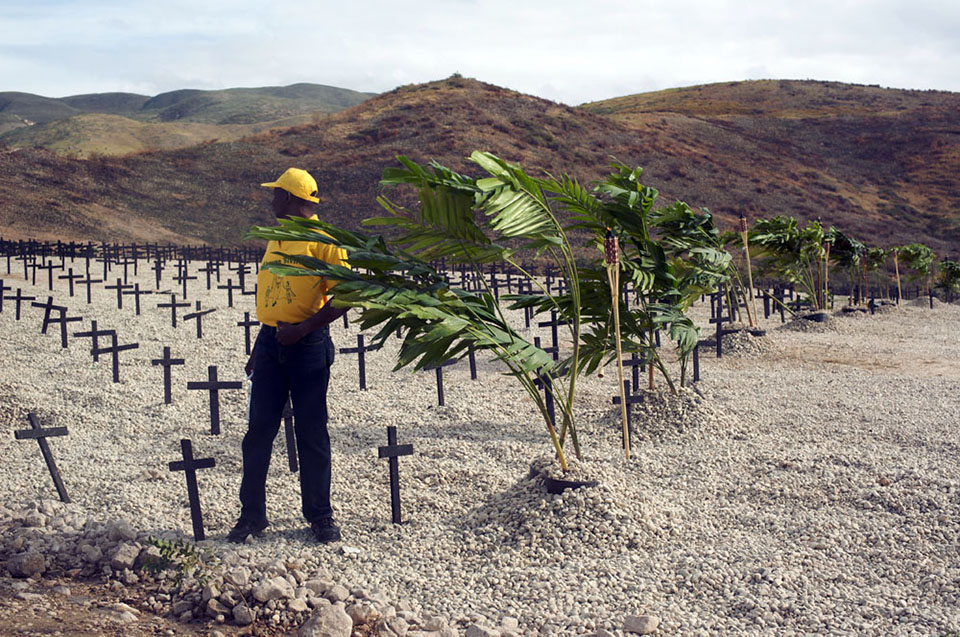 Crosses are planted on top of a mass grave in Port-au-Prince in preparation for commemorations of the one-year anniversary of the devastating earthquake that killed more than 300,000 people and left more than 1 million homeless. 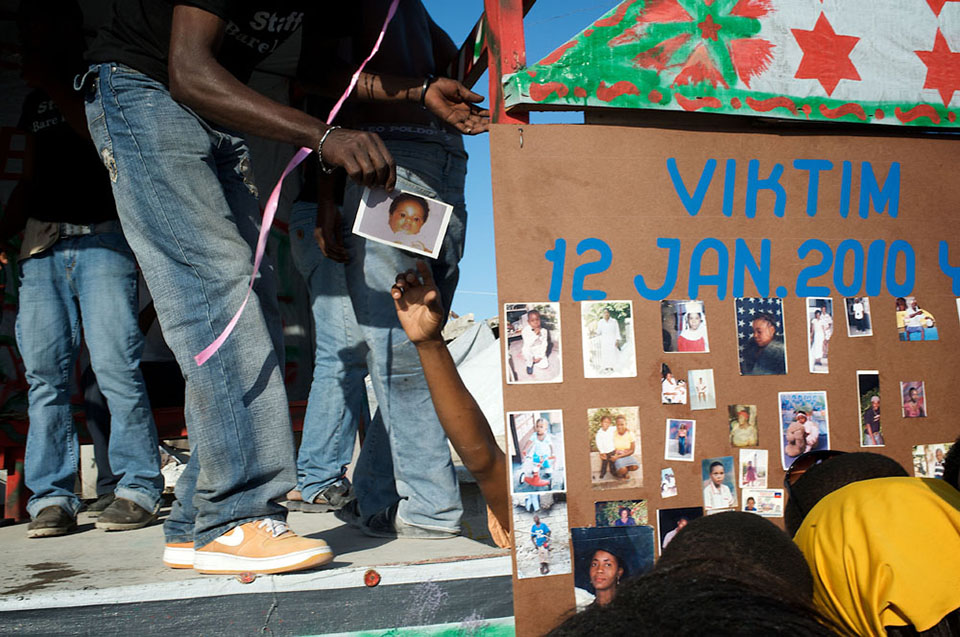 A memorial for victims of the earthquake, one year later. 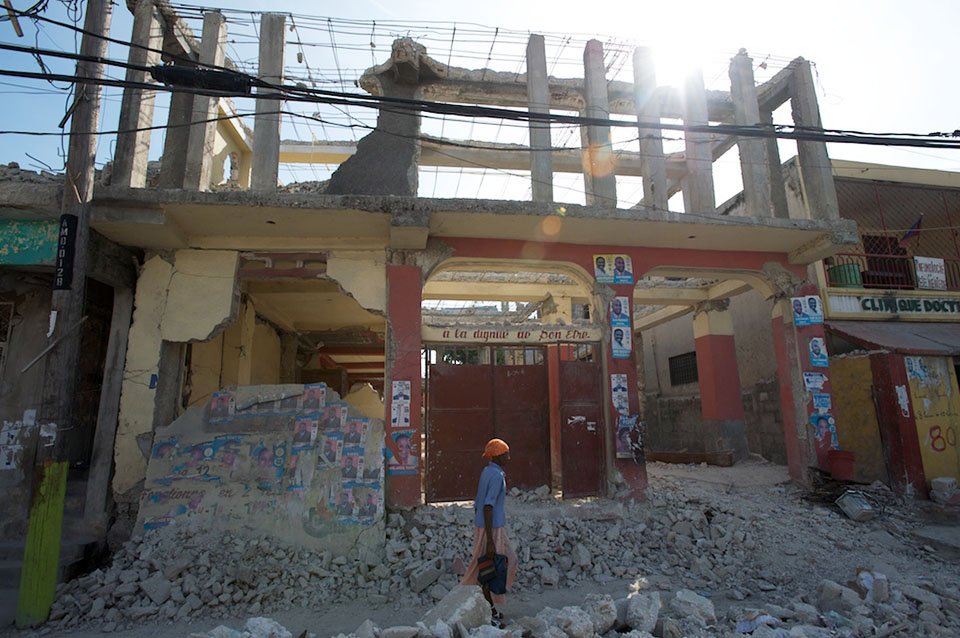 A woman walks past a demolished building in Port-au-Prince. The inscription above the door may be the remnants of a missionary motto, L’Education leve un homme a la dignite de son etre—”Education elevates man to the dignity of his being.” 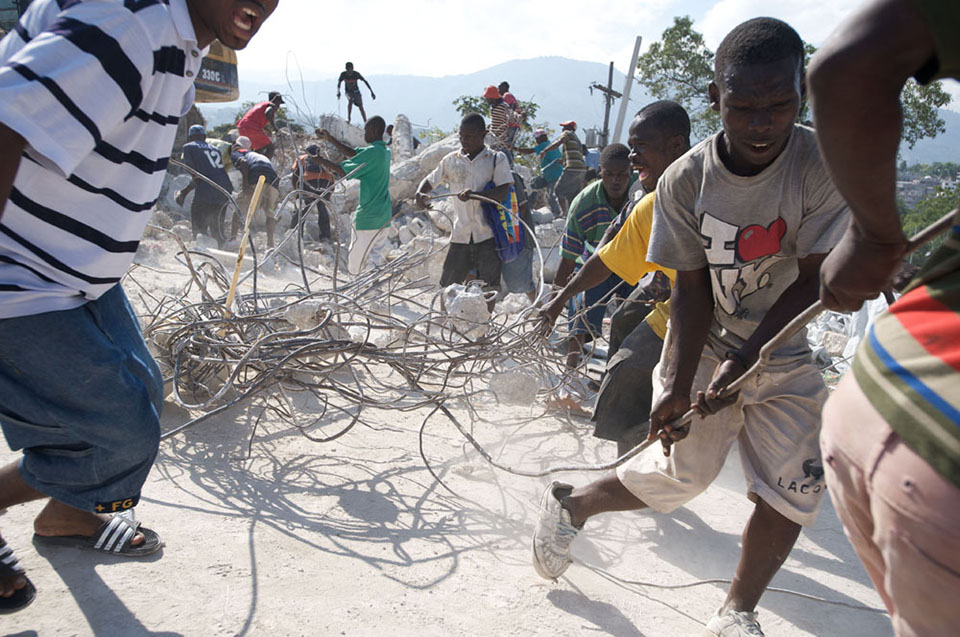 Scrappers scramble across a demolition site to sift through the debris for rebar and other materials to be resold. One says he makes several hundred dollars a week as a scrapper—much more than he did as a charcoal seller before the quake. The site manager says he tries to shoo the scrappers away: “They want to keep the good scraps to themselves.” 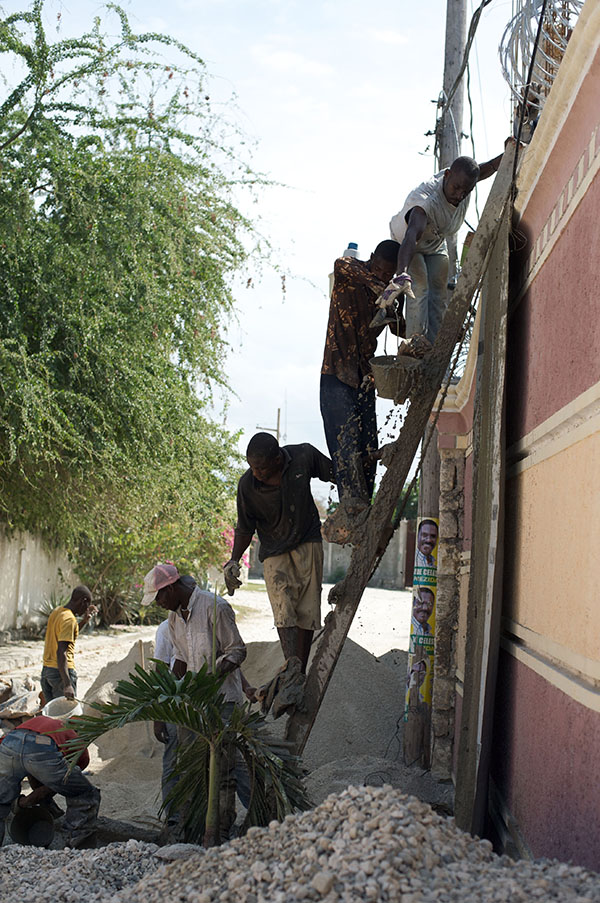 Rebuilding in the Vivy Michel neighborhood of Port-au-Prince. One man explains, “[Haitians] know the government isn’t going to help them, so they are doing it themselves.” But: “Only people who have the money.” The Haitian government has estimated that 250,000 houses were destroyed by the 2010 earthquake. 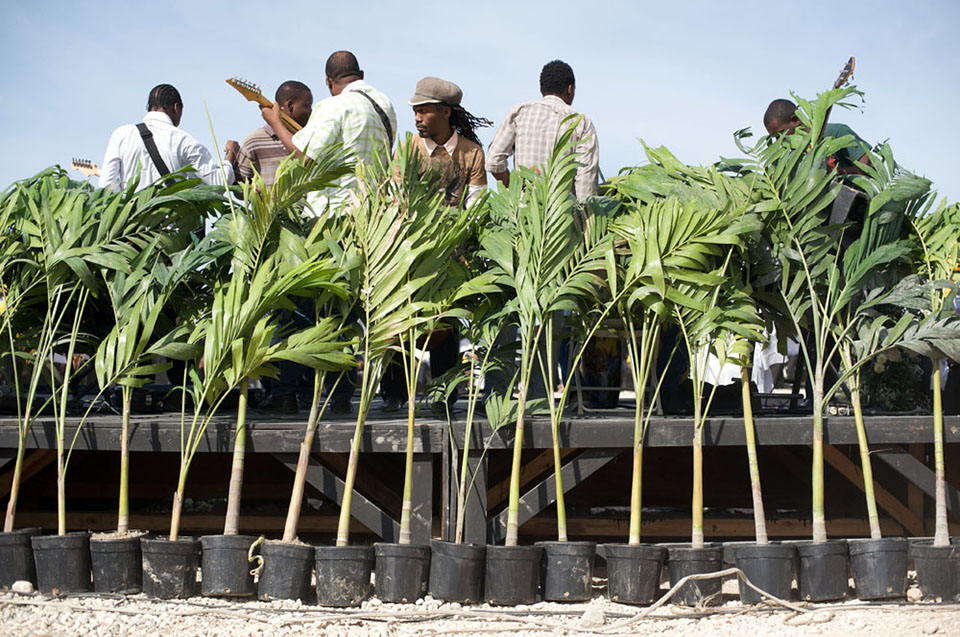 A band plays at the memorial for victims of the earthquake who were buried in mass graves at St. Christophe. The United States has pledged $1.15 billion to help rebuild Haiti. So far, only $120 million of those funds have been allocated, due to the slow-moving appropriations process on Capitol Hill. 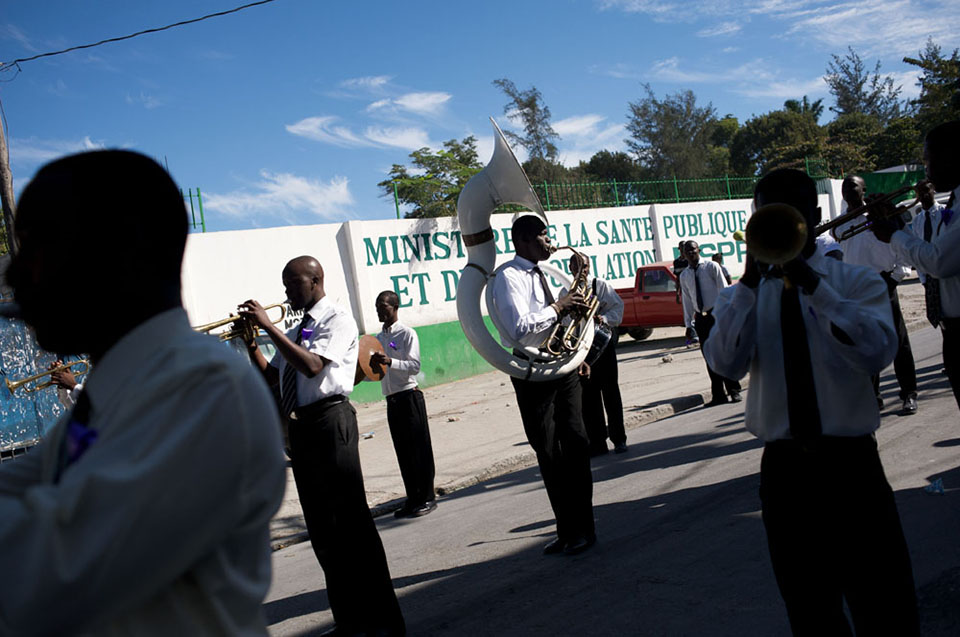 A police marching band strikes up a tune on the one-year anniversary of the earthquake. 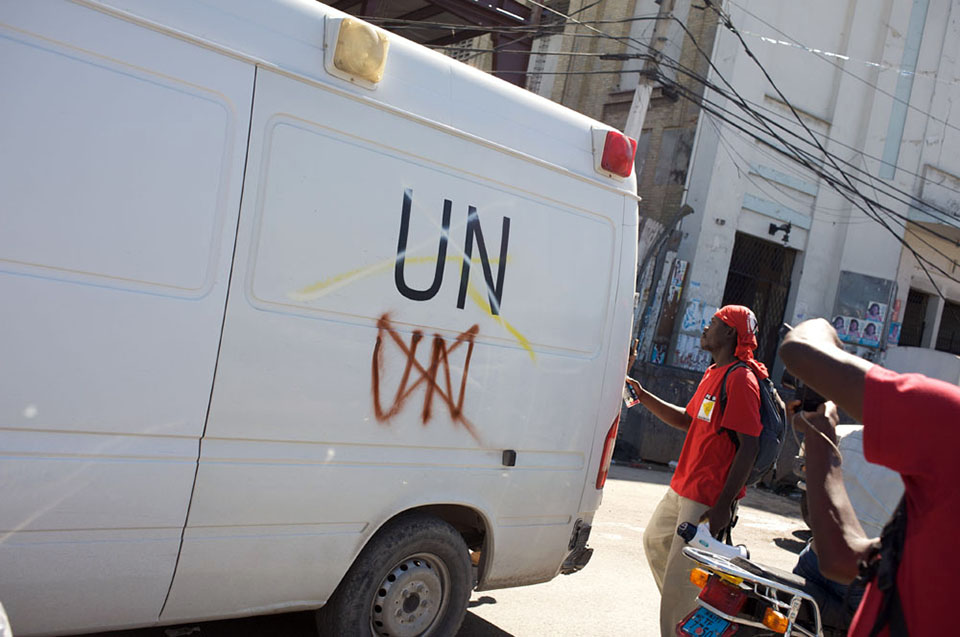 A small group of demonstrators takes to the streets to protest the presence of the United Nations, whose 10,000-soldier peacekeeping force is unpopular with many Haitians. 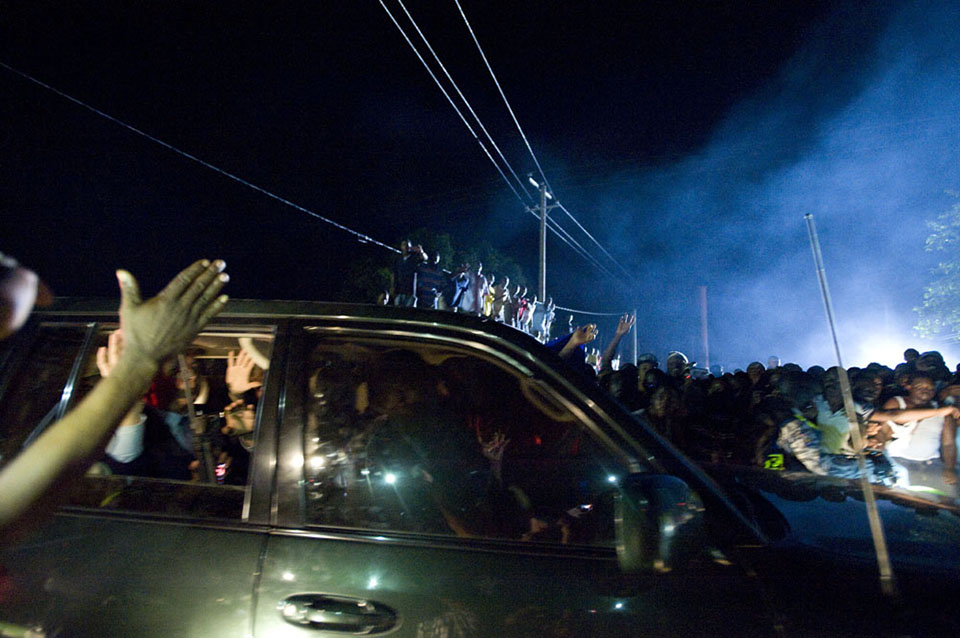 A car carrying Jean-Claude “Baby Doc” Duvalier leaves the Port-au-Prince airport. Claiming that he hopes to help his country, the former Haitian dictator has returned after 25 years of exile. 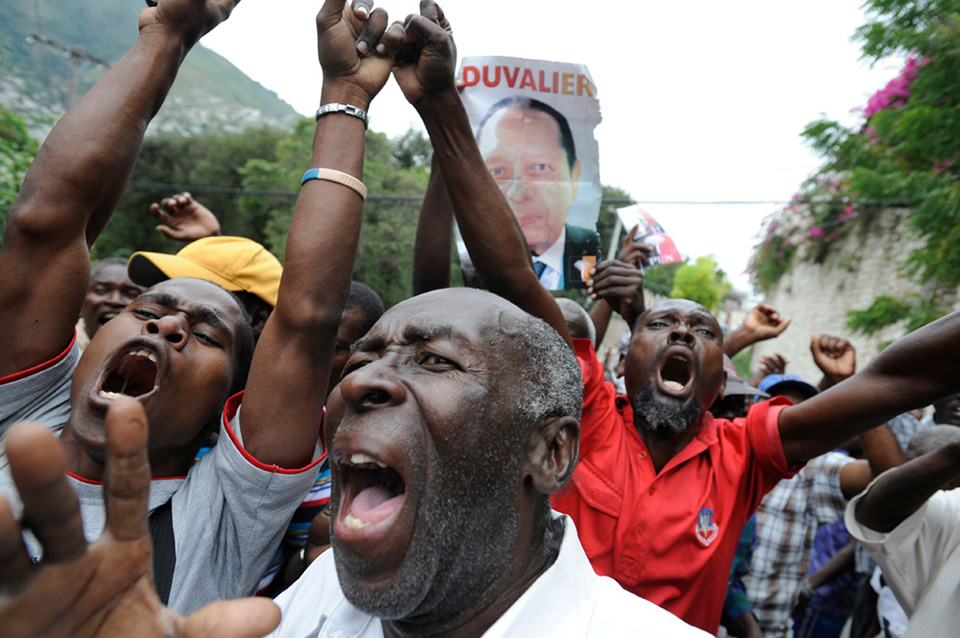 Crowds react to former Haitian dictator Jean Claude Duvalier, aka Baby Doc, being taken into custody. Duvalier returned to Haiti after being exiled 25 years ago. 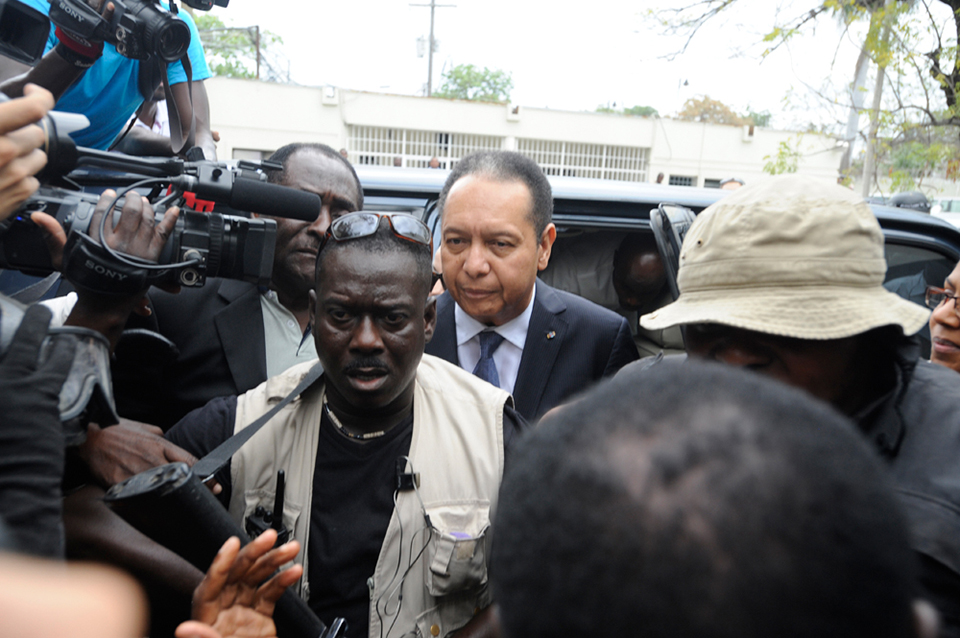 Duvalier was led from his hotel in Petionville to the courthouse in downtown Port Au Prince. 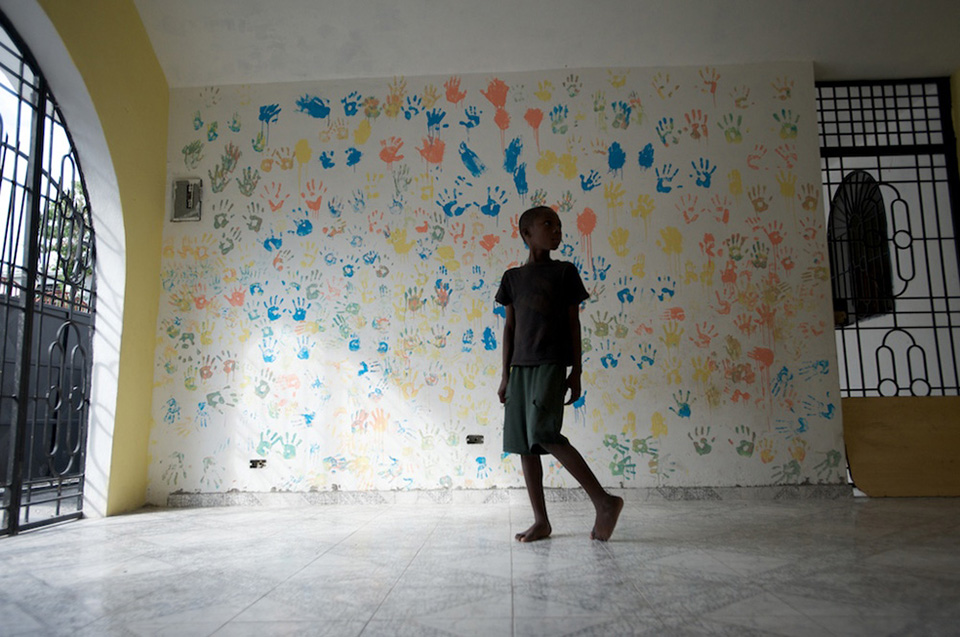 A child at the Foyer de la Patience des Enfants de Favorises orphanage in Port-au-Prince. According to the UN, Haiti had 380,000 orphaned children in 2007. 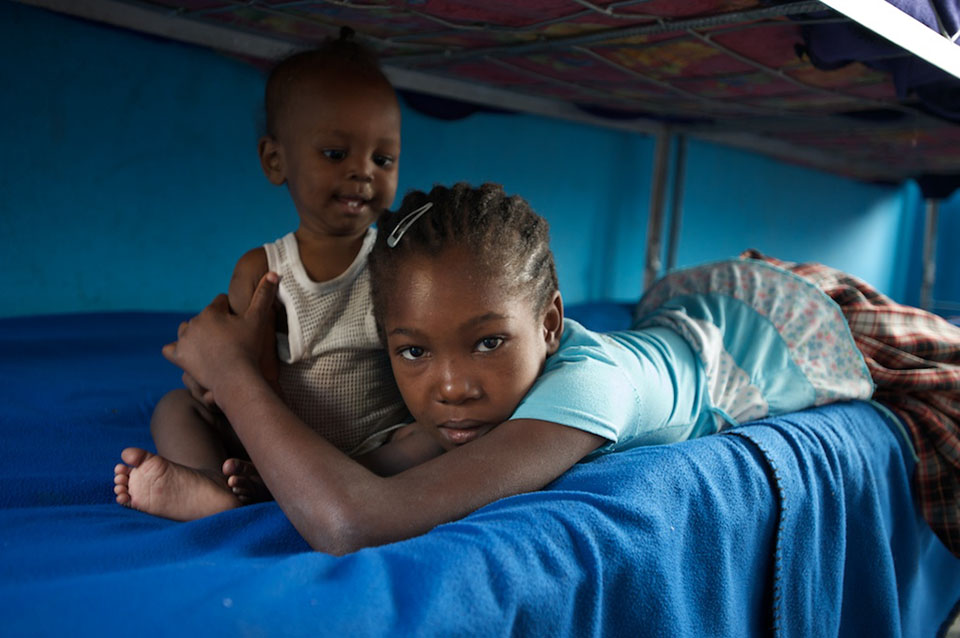 This two-room orphanage houses 50 kids, many of them the children of earthquake victims, ranging in age from infants to grade-schoolers. “I don’t have money to buy shoes, to buy shirts for the kids,” says director Frantz Joseph. 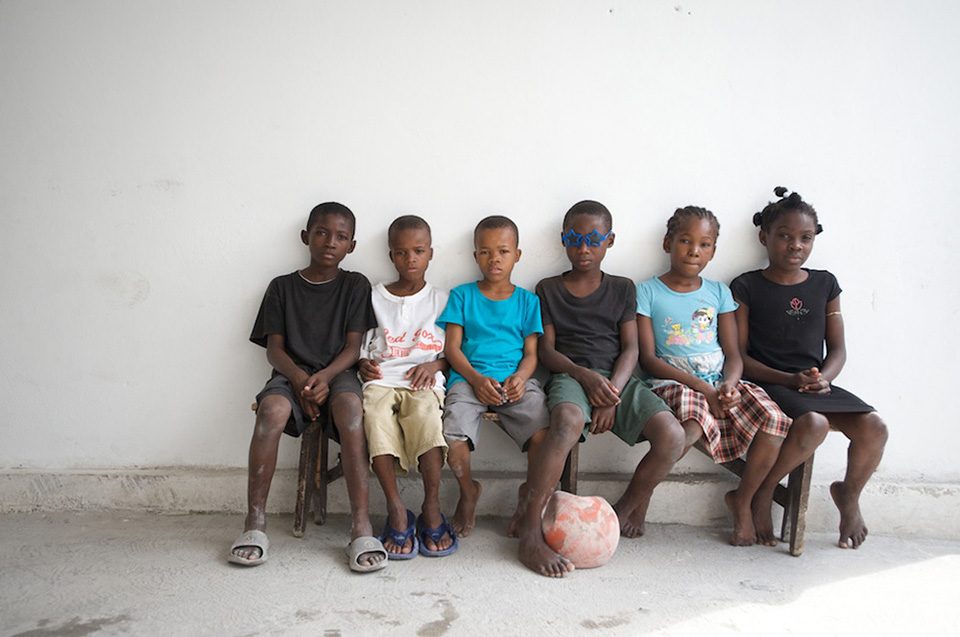 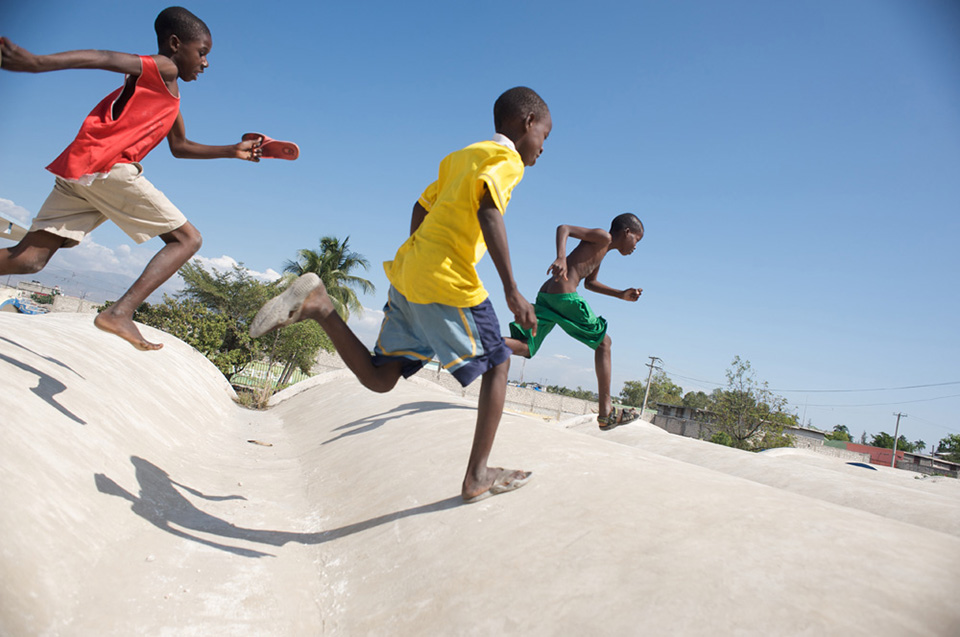 Children race on the rooftop of a closed school in Port Au Prince.