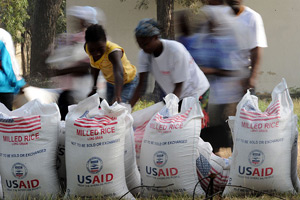 Inside Peterson’s tent, the 20-year-old shows me a narrow room with a few propped-up wood planks for benches, all oriented toward the platform at the front that holds the TV. Patrons pay 10 gourdes, or about 25 cents, to watch sex flicks under the USAID tarp on weekend nights. During the week and on days when school’s out, they pay half as much for Haitian movies, or non-Haitian movies, like Schwarzenegger vehicles, or films about ninjas. Peterson’s been in the theater business for eight months. His establishment gets pretty full, but it’s small, and it’s cheap, so he only makes about $2 a day.

Peterson’s is one of three theaters in the camp. “It’s nice that the cinemas create a distraction,” says camp vice president Exalus Fritznel. “People have nothing to do. There’s no jobs.” Many of the 22,000 residents of this lawless and squalid soccer field borrow money to buy water or food or shampoo and try to resell it at a profit. “If residents don’t make some [job] to do, their kids will be hungry, or die,” Fritznel explains. Sometimes NGOs provide “cash-for-work” jobs, “but it only employs a few people, and for a few days.”

There are currently 10,000 aid organizations in Haiti. Yet there is little coordination between them, they are not present in all the camps, and they do not deliver anything close to comprehensive food aid. In general, their goal is to only fill the displaced’s most basic needs, like temporary housing, hygiene, and toilets. “We want to provide minimum services in camps,” explains an International Organization for Migration spokesman, “and at the same time make sure services are provided in communities.” The Clinton-Bush Haiti Fund raised $53 million in the aftermath of last year’s earthquake and has already committed $20 million. But all of its recent grant recipients work outside the camps.

While waiting for former president Bill Clinton to arrive and dedicate Port-au-Prince’s reconstructed Iron Market, I spoke with Mark Summer, the cofounder of the San Francisco-based non-profit Inveneo, which has gotten Clinton-Bush money to help bring Internet to rural areas. Summer told me how thrilled the Haitians he helps are for the opportunity to communicate better or start online businesses. Though Inveneo usually works on a three-year timeline, it’s fast-tracking its Haiti project, trying to get in and out in one year. Part of the reason is that Summer is aware of complaints about aid to Haiti.

And there are plenty of complaints. Critics posit that development aid creates crippling emotional and financial dependency among recipients; Slate ran a four-article series on this idea last week. Some of the complaints come from Haitians. Two days ago, while earthquake-anniversary commemorations were taking place all over the country, some groups protested against aid groups’ “occupation” of the country. Entire grassroots organizations are dedicated to opposing the United Nations, which presides over the massive NGO force as well as an army of 10,000 soldiers stationed for “stabilization.” In his official statement on the anniversary, President Obama said that Haiti “can and must lead the way, with a strong vision for its future. The international community must now fulfill the pledges it has made to ensure a strong and sustained long-term effort.” But the international community isn’t dropping off billions of dollars of aid and abdicating any say in how it’s spent. The Interim Haiti Recovery Commission is led by Clinton, whom Haitians widely and sometimes bitterly refer to as the president of the country. (When I asked someone outside the still-ruined National Palace when it was supposed to be rebuilt, he snapped, “Why don’t you ask Bill Clinton?”)

It’s certainly true that Haiti’s long history of foreign aid has not dragged it out of extreme poverty. But it’s also true that many Haitians feel that their lives are improved by what help they get. And for now, the NGOs are the only game in town. Regularly mistaken for aid workers, both Mother Jones photo editor Mark Murrmann and I have been approached and asked if we can give people jobs. A displaced man hanging around the demolished National Cathedral approached me and said, “I’m happy you’re here. When white people are here, we can get milk,” and he pointed at the starvation-swelled naked toddler holding his hand.

“We have no government!” one of my Haitian friends often exclaims. He works for aid workers, but hopes that someday he will work for a functioning Haitian government. He hopes that maybe after the elections in February, the country will move closer to having one. Maybe, as the aid critics suggest, the government would just pull itself together if the international community pulled out. If it weren’t so dependent on Western NGOs, perhaps it would have, say, quickly mobilized to figure out how to deal effectively with the cholera epidemic. “Or,” my friend says, “you know. Maybe it wouldn’t have.”