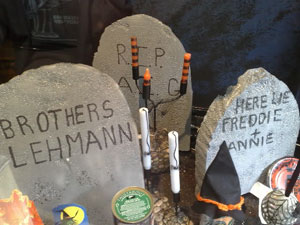 HuffPo’s Shahien Nasiripour has a great story today on the turmoil that’s engulfing the Financial Crisis Inquiry Commission (FCIC), the bipartisan panel charged with investigating the causes of the financial crisis. Nasiripour reports that the GOP members of the commission are planning to issue their own report blaming the government for causing the collapse. But that’s not the scariest part. This is:

During a private commission meeting last week, all four Republicans voted in favor of banning the phrases “Wall Street” and “shadow banking” and the words “interconnection” and “deregulation” from the panel’s final report, according to a person familiar with the matter and confirmed by Brooksley E. Born, one of the six commissioners who voted against the proposal.

As I noted on Twitter, this little item is so absurd that it seems like it can’t be true.

It seems pretty clear that the government did play a role in exacerbating the crisis. Liberals and conservatives alike can find many things to criticize in the government’s response to the collapse of Bear Sterns and Lehman and the backdoor Goldman Sachs bailout that was the AIG rescue. But according to Nasiripour, the GOP members of the commission aren’t focused on the bank bailouts. Instead, they’re embracing the idea that the crisis was caused by the sinister combination of (1) Fannie Mae and Freddie Mac, the giant government-backed mortgage lenders and (2) a 1970s-era law encouraging lending to blacks and Hispanics. In this story, Wall Street, shadow banking, and deregulation had nothing to do with the meltdown. Republicans have been pushing this fairy tale for years.

According to the version of the story the GOP side of the FCIC seems poised to embrace, Fannie and Freddie’s moves to buy up huge numbers of subprime mortgages caused the market for subprime and derivative products to explode. As my colleague Andy Kroll has explained, the myth of Fannie Mae and Freddie Mac causing the financial crisis is just that: a myth. Sure, Fannie and Freddie stupidly bought a lot of subprime loans towards the end of the mortgage boom. But they weren’t leading the charge—they were trying to keep up with their Wall Street competitors. Edmund Andrews explains the problem simply: Fannie and Freddie “weren’t pushing their private sector rivals to roll the dice. They were late to the craps table and desperately trying to make up for lost time.”

The Community Reinvestment Act, a law passed in the 1970s to encourage lending to minorities, is the second piece of the puzzle for the Republicans on the panel. If you’ve been paying attention since the crash, you’ve heard this story before: the poor Wall Street banks couldn’t help but make risky loans to underqualified borrowers because the government was making them do it! Of course, in 2006, just SIX PERCENT of sub-prime-type loans were issued by institutions subject to the CRA. But nevermind that. The GOP insists that letting minorities borrow money caused the economy to collapse, and they’re not going to let pesky things like facts get in the way.

Look: there’s room in the FCIC inquiry to criticize government and its response to the crisis. There’s room to criticize how banks were regulated and how they were bailed out. There’s room to criticize decisions taken during both Democratic and Republican administrations. After all, neither party displayed much backbone over the past few decades when it comes to financial regulation and economic management. The FCIC report could help people really understand what happened: how both parties played a role in the disaster; how government, private business, rich bankers, and ordinary people were all at least partially at fault; and, most importantly, how we can try to prevent similar debacles from plunging the country into economic peril. In that context, seeing supposedly super-serious, top-level Republicans like Douglas Holtz-Eakin (a former CBO head!) and Keith Hennessey (who ran the National Economic Council!) embracing the worst kind of fact-free nonsense about the financial crisis is a profound disappointment.