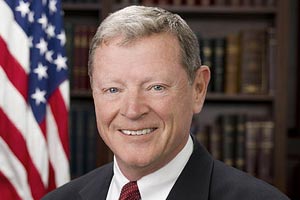 The Senate’s leading climate change denier, James Inhofe (R-Okla.), isn’t making an appearance in Cancun this year. He dropped in for a short visit to Copenhagen last year, where his presence mostly served to confuse and disturb reporters from other countries. This year he decided to make a video presentation at a side event in Cancun organized by Americans for Prosperity, an astroturf group funded in part by fossil fuel interests, rather than show up. But he and three other Republican Senators on Thursday reminded the world that they intend to block funding for climate-related issues.

In a letter to Secretary of State Hillary Clinton, Inhofe joined John Barrasso (Wy), David Vitter (La.), and George Voinovich (Ohio) in requesting that the US stop “wasting” money on programs to help developing countries reduce emissions and adapt to climate changes. In Copenhagen, the leaders of developed countries, including the US, agreed to provide $10 billion a year for projects for the next three years, and $100 billion a year by 2020. The details of that funding are among the issues under negotiation in Cancun right now.

“We remain opposed to the US commitment to full implementation of the Copenhagen Accord, which will transfer billions of US taxpayer dollars to developing nations in the name of climate change,” wrote the senators. “We do not believe that billions of US taxpayer dollars should be transferred to developing countries through unaccountable multilateral or bilateral channels for adaptation, deforestation and other international climate finance programs.”

The senators note that that their main concern is deficit spending. But most of them also believe that climate change is a giant hoax anyway (save Voinovich, who has sponsored legislation on the issue in the past). They also claim in the letter that findings about climate change reached by the Intergovernmental Panel on Climate Change were “exaggerated or simply not true,” which is, of course, a gross overstatement of a minor error in one report about glaciers that didn’t actually change the fact that the glaciers are still melting, the earth is still getting hotter, and there are thousands of pieces of scientific research that validate that finding.

But they certainly hit a nerve in the letter. Other countries are growing increasingly worried that the US will not follow through on its commitment to provide money for a climate fund. How to create the fund is a big part of the negotiations here. The US budgeted $1.3 billion for climate financing for 2010, and the Obama administration requested $1.9 billion for 2011 (though that has not been approved). But there’s concern that, with Republicans in charge of the House, getting the US to commit more money for climate will be impossible. The senators’ letter stands as a reminder that, if they have anything to say about it, the US certainly won’t.

Republicans don’t control the Senate right now of course, but they can effectively block aid. And they do control the House, where the vast majority of GOP members also dispute that the planet is warming–which means they could cause problems in terms of the US delivering the funds is has promised.