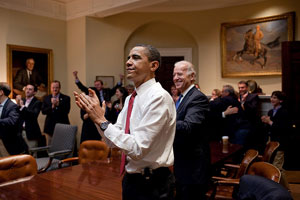 On Monday, Henry Hudson, a federal district court judge previously best-known for sending NFL quarterback Michael Vick to prison, became an instant conservative superstar by striking down the individual mandate, the part of the Democrats’ new health care reform law that will require Americans to buy health insurance or pay a fine.

Hudson wasn’t the first federal judge to rule on the Affordable Care Act—two others already upheld it, and another is due to release his decision Thursday—but the George W. Bush appointee was the first to deem part of the law unconstitutional. The battle is almost certain to reach the Supreme Court, where conservatives hold a 5-4 majority. If Bush v. Gore is any indication, health care reform could be in serious trouble. (My colleague Suzy Khimm has more on the individual mandate ruling here. Kevin Drum, meanwhile, says President Obama should accede to Republican demands and ask the Supreme Court to review the case right away, skipping the lengthy appeals process.)

There’s more to this story, though. Unfortunately, most of the commentary on Hudson’s decision [PDF] focuses on its immediate impact on the health care law. But the issues at stake in Cuccinelli v. Sebelius (Ken Cuccinelli is the conservative attorney general of Virginia; Katherine Sebelius is President Barack Obama’s Secretary of Health and Human Services, or HHS) are actually far broader. Hudson’s ruling doesn’t just show how the Supreme Court could gut the health law—it shows how the court could neuter the entire federal government.

The Constitution’s commerce clause says that Congress has the power to “regulate Commerce with foreign Nations, and among the several States.” It is the fundamental underpinning of nearly every federal law regulating the economy. Limiting its scope undermines the whole project of government intervention in the economy—and gets America closer to the libertarian goal of an “unfettered” free market. Hudson’s ruling—and Cuccinnelli’s argument against the individual mandate—would do just that. Under the Cuccinnelli/Hudson theory, the government may be able to regulate voluntary actions that an American take—buying health insurance, for example. But the government cannot require an individual to participate in interstate commerce if he or she does not wish to do so. Here’s the relevant part of Hudson’s decision (it’s on page 23 of the PDF):

Every application of Commerce Clause power found to be constitutionally sound by the Supreme Court involved some form of action, transaction, or deed placed in motion by an individual or legal entity. The constitutional viability of the [individual mandate] in this case turns on whether or not a person’s decision to refuse to purchase health care insurance is such an activity.

It should be pretty clear to anyone who’s ever been in a car accident that refusing to buy insurance for something can have broad economic effects. So in its briefs, the Obama administration argued for a broad definition of “activity,” and noted that, in the economic arena, simply refusing to act does not place Americans outside of the reach of government regulation:

Virginia claims that “inaction in the present, with respect to one subject matter (insurance), which can lead to undesirable results in the future, is [not] ‘activity,'” and therefore beyond the commerce power. This standard is incoherent. Congress can regulate current behavior—even behavior that Virginia would paint as “inaction”—to avert effects on commerce in the future. The person who allows hazardous waste to leak from his property “without any active human participation” is fairly described as inactive. Nonetheless, the Fourth Circuit recognized that he could not “insulate himself from liability by virtue of his passivity,” and that he was subject to the Superfund Act.

Most legal scholars agree with the Obama administration on this. They believe the commerce clause allows Congress to regulate economic decisions, not just economic activity. Hudson, as you know by now, doesn’t buy that argument. Hudson believes the Constitution provides for a federal government far more constrained in its abilities to regulate the economy than any state government. In the state of Virginia (ahem), for example, drivers who refuse to purchase auto insurance have to pay the state $500 a year. In making this claim, Hudson has “rewritten the Commerce Clause,” Tim Jost, a professor at Washington and Lee University law school, told reporters on Monday.

Drastically limiting the scope of the Constitution’s commerce clause (as Hudson would do) is the slippery slope to the libertarian paradise. Almost every meaningful action the federal government takes with regard to the economy rests on the commerce clause. In the past, the Supreme Court has read that clause to be incredibly constrained. During the Lochner era (1897-1937), the court struck down laws regulating working hours, child labor, and minimum wages as inappropriate interventions in individuals’ “freedom of contract.”*

In that time, individuals’ “rights” to do whatever they wanted in the market—even if a 12-year-old “agreeing” to work 80 hour weeks for next-to-nothing made it more likely that other children would have to do the same—were thought to outweigh the state’s interest (and, you know, the moral imperative) in not having children being worked to death in textile mills.

Similarly, in Hudson’s decision, an individual’s “right” to decline to purchase health insurance—even though, by doing so, she is creating a future burden on the state and making it less likely that the state will be able to pay for health care for others—is more important than the state’s interest (and the moral interest) in trying to make sure that people don’t die because they don’t have enough money to pay for health care. The individual’s economic rights trump all else—even the right (which, to be fair, many conservatives don’t believe exists) of other citizens to life: the right to not die because they don’t have health insurance.

There’s more to be said about the validity of Hudson’s constitutional arguments. Over at the Incidental Economist, Ian Crosby explains why even if you buy Hudson’s argument that refusing to purchase insurance is not “activity,” the ruling still doesn’t hold water. But it’s important to remember that there are real people’s lives at stake here, and more fundamental things than arguments over constitutional legalese are at stake. Anthony Kennedy and Antonin Scalia are smart legal minds. They can probably make a fairly convincing constitutional argument for anything they decide—and as Bush v. Gore showed, they don’t even have to do that.

Ultimately, the nine members of the Supreme Court are going to be making a political decision about how much power they believe the government should have over the economic activities of ordinary Americans. Should the feds be able to require people to buy insurance for health care, a universally used good that society is expected to (and does) provide? Or does the Congress of the United States have less power to regulate health care than the Legislature of the Commonwealth of Virginia has to regulate who pays to fix your Jetta after a fender-bender?

*I corrected this. It originally said “routinely” struck down “federal” laws. But state laws were the central issue, not federal laws. (The law at stake in Lochner itself was a New York law.) And “routinely” is disputable. I also changed “right of contract” to “freedom of contract,” which is more correct. Sorry.