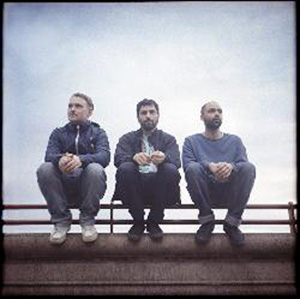 Junip, an astral-rock band from Gothenberg, Sweden, took a full decade to put together Fields, the debut album it released in September. The delay, suggests modest front man Jose Gonzalez—who initally became popular as a solo performer—was a matter of talent catching up with vision. “You could say we’re not good enough musicians to make what we want to do,” he told me.

Then there was the geographical factor. The band members have been preoccupied with projects that kept them scattered about—organist/moogist Tobias Winterkorn was teaching and building his personal studio, Gonzalez recording solo albums Veneer and In Our Nature; and drummer Elias Araya studying art in Finland and Norway. Practicing and recording were scheduled around periods of separation—and Fields was ultimately created out of samples spanning that decade—as Winterkorn puts it, “taking out the raisins from the cake to eat them.”

In all that time, Junip played maybe a few dozen shows, but the band has already rocked more than 80 venues during its current whirlwind tour of the United States and Europe. I caught them recently at San Francisco’s Independent, where singer-songwriter Sharon Van Etten opened to the sold-out crowd. With her sensuous harmonium and sensitive lyrics, Van Etten made the venue seem small and intimate.

Junip came next, setting a similar mood with a red, hazy stage and waist-level girandoles on either side. The disco balls created tiny dots of light that chased each other against a sunburst backdrop as the trio opened with “Rope and Summit, which is apparently their best-known song. Tobais’ keys and Araya’s percussion built a quavering melody around the curly-haired Gonzalez, who rocked and bobbed above his acoustic guitar.

Gonzalez’s vocals have a distinctive tunnelly texture, which I’d assumed was just a studio thing, but was surprised to learn that it’s his natural voice. In his sleepy voice, he implores listeners that we need to wake up, and reassures us that slipping is fine / as long as you don’t fall. His voice is so hypnotic that the guy standing next to me asked what language Gonzalez was singing in.

The lyrics that get the most varied reactions, Gonzalez told me, are from “Howl,” a song that could have been written by an ethics student to his instructor, inquiring about the varying degrees of free will / compatible with senseless building blocks; moral responsibility; and what leads to exuberance and flourishing of the soul. During our converstaion, he critiqued these lyrics as “too brainy… Music should be more about emotions.” At the time he wrote it, he added, he’d been thinking a lot about the theories of Daniel Dennett, a cognitive science and philosophy professor at Tufts University.

On stage, Gonzalez’s heavy, thoughtful words are supported by fun little tricks. Winterkorn’s keys melt from hopscotch-like intervals in one song to deep rumbling in another. The punchy beats of “Sweet and Bitter” give the impression that Gonzalez is about to start rapping, which he isn’t. And at one point during the SF show, Arya applied a beer bottle to the head of one of his congas to alter the pitch. Araya, Gonzalez told me, was inspired by cassette tapes his Ethiopian mother listened to when he was a boy—particularly influential was an artist named Aster Aweke; that East African sound is reflected in Araya’s drumming.

The touring hasn’t been all work, Gonzalez told me when I asked about Junip’s grueling schedule. In Marfa, Texas, their tour manager instigated a disagreement over which band member was the fastest, which led to a fierce footrace? “Our sound guy, Jesper Lindell, came first. He’s the fastest and the strongest,” the singer concedes.

But Junip hardly seems like a band racing to some sort of finish line. Asked about plans for a next album, Gonzalez simply replied, “Yeah, I’m trying to gather new stuff; I don’t know how to record it yet. For my solo stuff, I usually take a long time to write and short time to record.” Fields was certainly worth the wait, but the ticket scalpers milling anxiously on San Francisco’s sidewalks that evening can hardly afford to wait another 10 years.