When I first heard about Google’s new Ngram viewer, I thought: Good God, when did the Scientologists get a hold of the search-engine monopoly? What’s next, online e-meters?!

Fortunately, our inestimable blogging machine, Kevin Drum, set me straight. Google’s new gadget—named for a generic measure of character-string length—gauges the popularity of selected terms over time, based on their frequency in the 5.2 million-strong book collection on Google Books. And Kevin promptly put it to good use, proving how “data is” has grown acceptable as an alternative to “data are.” (I’m with you, K., though I’ll probably have my American Copy Editors Society card yanked for admitting it.)

Kevin’s also got the right idea, treating this thing as it should be treated: a fun toy. I’m sure some journalists and academics will flock to it as a source for trend stories and testable hypotheses, and that’s just fine. But it’s of limited scientific utility just now. That, of course, will change as the cloud finds new ways to mash up the Google Labs technology. Until then, here’s a comparison of the frequency with which we’ve referred to “global thermonuclear war” and “red fire engine” since 1920: 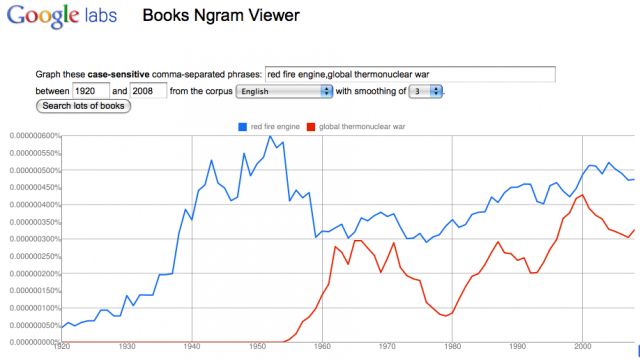 And if you’ve always wondered who’s been written about more since 1998—academic postmodernists, or Saddam Hussein and Osama bin Laden—here’s your answer: 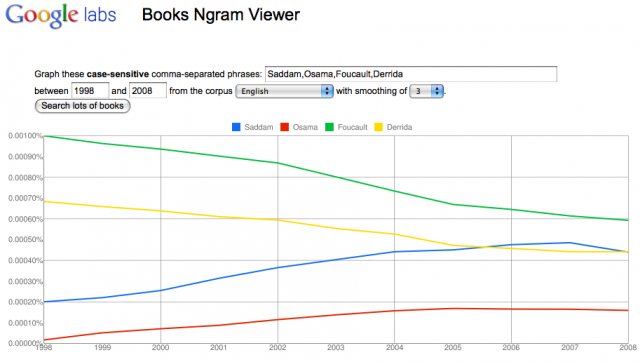