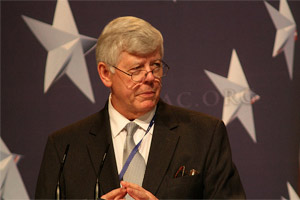 Someone this week leaked a juicy story to WorldNetDaily indicating that $400,000 in donor funds had been embezzled from the American Conservative Union, an old-line conservative advocacy group that organizes the annual Conservative Political Action Conference (CPAC). The premiere Republican political convention, CPAC is the testing ground for GOP presidential contenders that has been addressed by everyone from Ronald Reagan to Dick Cheney. ACU apparently disclosed the theft in its recent tax filings, noting that it had referred the case to the authorities. WND points out that the nonprofit group’s bookkeeper was the ex-wife of ACU chairman David Keene, and that she had been fired earlier this year.

The story is an especially nasty hit on ACU by an organization that would normally be considered a friend. But not only did the conservative website best known for its regular “birther” updates break the news of the ACU scandal, but WND also took the opportunity to pile on Keene. WND dragged up a host of other scandals from the ACU’s past, including the fact that Keene’s son is serving a 10-year prison sentence for a road rage incident in Virginia in which he fired a gun at another motorist, narrowly missing his head. At the time, David Michael Keene was apparently working for his father at ACU. According to WND, the incident proved even more embarrassing for the elder Keene, who is a high ranking member of the National Rifle Association and currently poised to become its next president.

It’s unusual for conservatives to air their dirty laundry like this, and it came during a serious internecine ideological battle in the conservative movement that’s largely about gays. Over the past few weeks, CPAC organizers have been fighting over whether or not the gay conservative group GOProud should be allowed to participate in the conference. Last year, CPAC allowed GOProud a table in the exhibit hall, and social conservative groups went bezerk, threatening to boycott. During the conference, a speaker from the California Young Americans for Freedom gave a homophobic rant attacking CPAC for allowing GOProud a spot at the conference. This year, GOProud is looking to be more involved, and again the evangelicals are in a tizzy, threatening to boycott the conference and generally throwing bombs at ACU, which has been putting on the show since the early 1970s.

WND has been right in the middle of that fight. Joseph Farah, WND’s founder, has been raising warning flags about homosexuals infiltrating the conservative movement for a while now, penning outraged editorials about GOProud’s “real agenda.” He organized a counterweight conference to CPAC this fall because of “the conservative movement’s capitulation to the radical homosexual agenda,” from which he disinvited Ann Coulter after she agreed to speak at GOProud’s convention, dubbed “Homocon,” in September. Farah has chastised Keene for promoting Homocon as well.

WND’s attack on ACU suggests that gay rights are the emerging fault line in the conservative movement, as more libertarian and tea party types accept gays into their ranks and abandon longstanding opposition to Don’t Ask, Don’t Tell and other elements of that particular culture war. It wouldn’t be surprising if WND’s scoop about the embezzlement came gift-wrapped from an anti-gay movement insider.