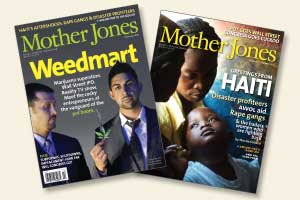 [Read also: The Mother Jones editors-in-chief on Haiti vs. pot.]

When I turned in a story about Burmese refugees late last year, my mom thought (based partly on the sheer staggering size of it—it came in at more than 10,000 words) that it was going to be on the cover of Mother Jones. When it wasn’t, because this creepy dude was, she dragged my uncles Ted and George, my aunts Paula and Kim, and my 80-year-old grandmother into a friend’s studio to complain about it to the tune of Dr. Hook’s “The Cover of the Rolling Stone,” then sent the recording to me.

Well, guess what. Despite one of my coworkers telling me she couldn’t read it past the first paragraph and another saying it gave her nightmares, my Haiti feature is on the cover of the new subscribers’ issue of Mother Jones. (The newsstand version sports a more fun/less horrifying topic: pot.) In honor of my mother’s wish being fulfilled (and because I have a really high threshold for embarrassment), I’m sharing the best song-present ever. (Speaking of pot, comma, my mother’s affinity for, be prepared for congas. And kind of a nonsequitur about my father, her ex-husband, being a pervert. I think the song’s writer, Shel Silverstein, would be…pleased?)