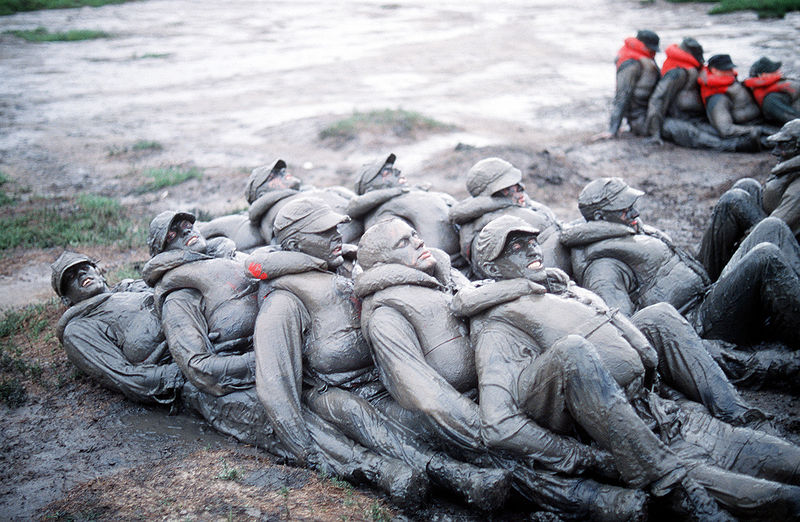 Navy SEAL training can be very intimate and dirty. <a href="http://commons.wikimedia.org/wiki/File:BUDS_trainees_mud.jpg">DOD photo</a>/Wikimedia Commons

The Washington Times, for decades a Moonie-owned, money-hemorrhaging adventure in right-leaning reporting, has a most fascinating story today: “Special-operations troops think the elite force is facing difficulties by accepting open gays into one of the military’s more politically conservative communities.” The story’s premise is that gays could wreak havoc on the Green Berets, Navy SEALs, Air Force pararescuers, and Marine recons. “Of particular interest,” the Times‘ Rowan Scarborough writes, “is how Navy SEALs, the macho sea, air and land commandos who put great emphasis on physical prowess, will accept gays.” Um, dude? You just answered your own question.

The story’s evidence is three pages of weird Family Research Council-style rants by anonymous military sources. Well, not entirely. As TPM‘s Josh Marshall points out, one of the story’s few named sources is George Worthington, who retired from the SEALs in 1992, four years before I was even old enough to join the service. A cursory web search reveals that Worthington was the commander of the Virginia-based SEAL Team One…in Vietnam…in 1972-74. Almost 40 years ago. And what a piece of work the old man is:

“If an open gay does his job, I think he’ll be accepted…I don’t think there is going to be that many of them that want to sign up for SEALs anyway because of the closeness and the tightness of the training. My opinion is that they’re probably more clerical oriented. Medical profession. Corpsmen. Stuff like that…”Put the word out. If you hit on somebody, you’re going to get in a fistfight…It just depends on how they comport themselves. If they start breaking out the bows and the earrings in the barracks, that might cause a little trouble.”

Unnngh, eeyah. Right. While we’re on the subject of nonsequiturs, there’s this, from (according to the article) “another Green Beret officer”: “Take the issue of showers. Is a soldier wrong for not wanting to shower with a gay soldier?” 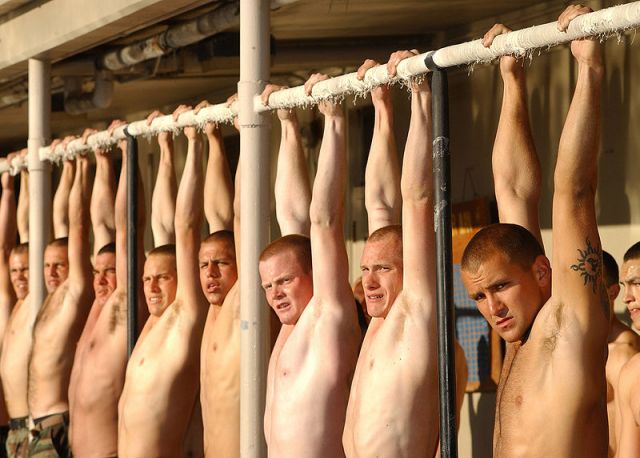 Well, yes. At the point where you signed up not only for the privations of military life but of the special operations community—that is, at the point where you volunteered to do this, this, this, this, and this in order to become a proficient snatcher-and-grabber, a demolitions expert, a sniper, and a steely-eyed combat killer, then yeah: If you can’t deal with showering with a shipmate because it feels ooky, it’s your damned problem, and you’re probably not specops material. Achieving that level of comfort with your teammates is a basic prerequisite of being a special warrior, albeit a prerequisite that’s rarely highlighted in the recruiting literature. Like being able to poop in the forest, subsist on crappy MRE rations, and deal with NOT showering or sleeping for days. Can’t do it? Don’t sign up.

What’s really strange about this story is that the Times acknowledges—in the final three paragraphs—that it’s a nonstory. It achieves this by quoting the military’s own conclusions from its 2010 Don’t Ask, Don’t Tell survey of the troops, a survey that predicts the specwar community will come around like everyone else:

“Anecdotally, we heard much the same. As one special-operations force warfighter told us, ‘We have a gay guy [in the unit]. He’s big, he’s mean, and he kills lots of bad guys. No one cared that he was gay.’ “

On a related personal note, I’ve known and served in the military with many special operators, particularly Navy SEALs. And everything about these guys is homoerotic, from their too-much-is-showing “UDT shorts” to their love of sugar cookies to every single freaking photographed minute of their basic training. My sense is that as long as gay sailors can run 12 miles, do twelve pyramid sets of pullups, withstand two hours of combat side-stroking in some foreign shore’s dark freezing surf, kidnap a terror suspect in a busy village without arousing any suspicions, and take a joke, the majority of operators won’t care who their shipmates are inclined to bed, date, or marry. A guy’s gotta have his priorities.