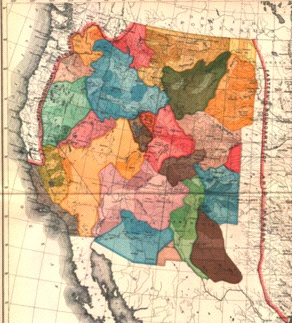 Map courtesy of USGSIt is a matter of public record that I’m an avid fan of weird maps. And over at the appropriately named Strange Maps blog, Frank Jacobs has unearthed a pretty neat one: John Wesley Powell’s proposal to divide the western United States into a series of amoeba-like blobs amoeba-like water districts. Powell, the one-armed geologist who first mapped the Grand Canyon, believed that water management was the single most important issue facing regional development, and therefore the West should be governed accordingly. Per Jacobs:

Powell’s warning at an irrigation congress in 1883 seems particularly prescient: “Gentlemen, you are piling up a heritage of conflict and litigation over water rights, for there is not sufficient water to supply the land.” Powell must have been frustrated by the contrast between the way his achievements were lauded, and his warnings ignored…

Like Jefferson’s states, the units proposed by Powell seem, well, the wrong shape. From a purely cartophile point of view, they don’t work as well as the states that did eventually make the cut. Ironically, they lack the normality of the present batch of straight-border states. Or is that just the force of habit talking?

To jump to Powell’s defense, I’d say the whole thing actually has a sort of Central Asian feel to it; you won’t find any box-like Wyomings hovering around the Hindu Kush. The biggest problem, though, seems to be that these places would be even less populated than our existing western states. The southwestern corner New Mexico, for instance, gets its own hypothetical state/district, even though no one actually lives, or ever has lived, southwest of Las Cruces.

Anyways, Powell was prescient in that he understood that management of natural resources and environmental limits were going to be preeminent issues facing the nation a century hence. But he was obviously shortsighted in thinking that 21st-century (or 20th-century, or 19th-century) leaders might ever be moved to do anything about it. To wit: His amoeba plan was scrapped at the behest of…the railroad industry.