For some time now I’ve been reporting on studies showing that wind turbines are deadly to bats—maybe even more deadly even than they are to birds. Well, I’m really happy to be able to report this new paper in today’s Frontiers in Ecology and the Environment showing how the industry might minimize or even eliminate bat mortality at wind turbine sites. Experimenting with small changes in turbine speeds, researchers were able to reduce bat deaths by as much as 93 percent while reducing power generation by only 1 percent or less. 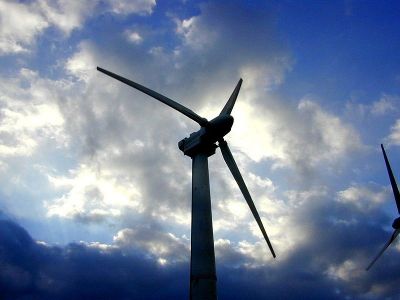 Credit: Harvey McDaniel, Wikimedia CommonsMigratory bats, like the hoary bats that fly up and down the forested ridges of the eastern US, are especially at risk of collision with turbines and the pressure waves they create. Since we know that turbine towers and non-spinning blades don’t kill bats, some scientists have proposed shutting off or limiting turbines during migrations. 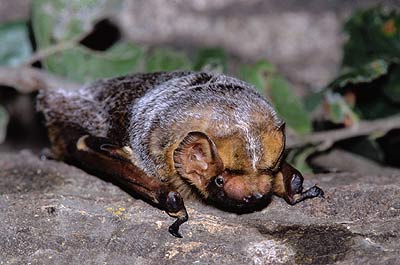 But by raising the cut-in speed to ~11 mph, bat fatalities were reduced by between 44 percent and 93 percent, with an annual power loss of less than 1 percent. The exeriments were conducted during months with seasonably low wind speeds, so the overall energy loss was marginal when calculated against annual power output.

The researchers monitored 12 of the 23 turbines at the Casselman Wind Project in Somerset County in the Pennsylvania Appalachians and recorded bat fatalities for 25 summer and fall nights in both 2008 and 2009. They analyzed fatalities following nights when the turbines were fully operational and when they were set to 11 mph and 14.5 mph, reporting mortality rates on average 3.6 to 5.4 times higher at the fully functioning turbines compared with higher cut-in speeds.

The investigation was conducted by reserachers from Bat Conservation International, Oregon State University, and the University of Florida, Gainesville. Here’s the abstract:

Wind-turbine operations are associated with bat mortality worldwide; minimizing these fatalities is critically important to both bat conservation and public acceptance of wind-energy development. We tested the effectiveness of raising wind turbine cut-in speed—defined as the lowest wind speed at which turbines generate power to the utility system, thereby reducing turbine operation during periods of low wind speeds—to decrease bat mortality at the Casselman Wind Project in Somerset County, Pennsylvania, over a 2-year period. Observed bat mortality at fully operational turbines was, on average, 5.4 and 3.6 times greater than mortality associated with curtailed (ie non-operating) turbines in 2008 and 2009, respectively. Relatively small changes to wind-turbine operation resulted in nightly reductions in bat mortality, ranging from 44% to 93%, with marginal annual power loss (≤ 1% of total annual output). Our findings suggest that increasing turbine cut-in speeds at wind facilities in areas of conservation concern during times when active bats may be at particular risk from turbines could mitigate this detrimental aspect of wind-energy generation.