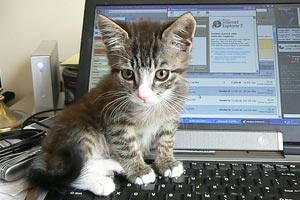 Phew! You’ve made it through another day at the office. You’re just about to don your coat and head out into the evening—but your computer’s still on. Should you turn it off, or leave it in “sleep” mode? Some say it’s better to shut down, since that way it won’t be using any power while you’re not around. But others say that the process of shutting down and starting up again uses more power than letting your machine sleep. Who’s right?

First things first: Turning your computer off, then on again does not use more power than leaving it on in “sleep” mode. “That’s a myth,” says Bruce Nordman, an energy efficiency researcher at the Lawrence Berkeley National Laboratory. Another myth: Turning your computer on and off is bad for the machine. “In order to do any real damage, you’d have to turn it on and off far more frequently than anyone would ever want to,” says Nordman. That said, trying to remember to shut down your machine every night isn’t necessarily the most effective energy-savings strategy. Here’s why.

Fifteen years ago, when computer manufacturers first experimented with sleep mode (it used to be called “standby”), the energy savings weren’t very dramatic. Today things are different: According to energy efficiency expert Michael Bluejay, while in use, the average laptop requires 15-60 watts, while desktops use 65-250 watts, plus an additional 15-70 for the monitor. In sleep mode, however, most laptops use a measly two watts, and desktops with monitors use 5-10 watts, says Nordman. (“Hibernate” modes on some computers use even less energy—for a good rundown on the difference between various power management modes, check out Michael Bluejay’s guide.) Because sleep settings use so little energy, Nordman believes that it isn’t really worth making a big production out of remembering to shut down your computer every day: “Much more important to make sure that your computer is set to go into power-saving mode after a certain period of idle time.”

The EPA’s Energy Star program agrees with Nordman—sort of. Using power-management settings (like sleep mode) is the best way to reduce your energy use, says Katharine Kaplan, who leads the EPA team that develops Energy Star requirements. Nevertheless, Energy Star still recommends unplugging computers—and most other electronics—at night. “If it were just computers, leaving them in sleep mode wouldn’t be a problem,” says Kaplan. “But people have so many devices these days that it really starts to add up.” When you do shut down devices, cautions Kaplan, be sure to unplug them completely, lest they become energy vampires. One solution: Smart Strips allow you to plug in several devices, with one designated as a “master.” When the master is turned off, the other devices shut down, too. (Just be careful not to accidentally turn something off that other machines in your house depend on, such as the WiFi.)

One last tip: Skip the screensaver. “Screensavers actually use more energy than a static image, since they require the computer to do calculations,” says Nordman. And they don’t even save your screen: Back in the days of the flying toasters, screensavers prolonged the life of your monitor, but that technology isn’t applicable to newer screens.

Thanks to the computer gurus at TechSoup for helping me research this post.

Correction: An earlier version of this article described computer energy use in terms of “watts per hour,” when it should be simply “watts.” We regret the error.