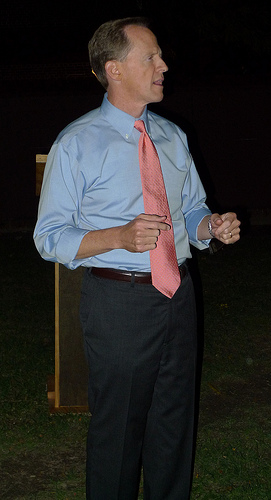 If the prospect of massive losses in the House and a thin Senate majority weren’t depressing enough for Democrats, here’s yet another downer of a factoid: In a handful of races, Democrats face a double whammy, with candidates losing both their Senate bids and their vacated House seats going to the GOP.

I’m talking about candidates including Reps. Charlie Melancon (D-La.), Paul Hodes (D-NH), and Brad Ellsworth (D-Ind.). For the 2010 election, these three congressmen launched bids for the Senate, but facing a Democratic backlash and anti-incumbent wave, all have struggled to gain traction with voters. Melancon, challenging incumbent Sen. David Vitter (R-La.), has trailed “Diaper Dave” by double digits since August; a recent Magellan Strategies poll put Vitter ahead by 17 points. In New Hampshire, Hodes’ bid to replace retiring Republican senator Judd Gregg has floundered, with GOP candidate Kelly Ayotte leading by a 16-point average, according to Real Clear Politics. It’s the same story in Indiana, where Ellsworth is being trounced by GOP lobbyist and former congressman/senator Dan Coats by around 20-points.

It’s bad enough that Melancon, Hodes, and Ellsworth’s odds of winning are practically zilch. But to make matters worse, the campaigns of all three Democratic candidates angling to replace them are flailing, too. Raj Sangisetty, the Democratic candidate for Melancon’s seat in Louisiana’s 3rd district, has trailed his opponent by around 10 points for months; Nate Silver’s FiveThirtyEight puts Sangisetty’s chances of winning at a measly 16.5 percent. Likewise, Hodes and Ellsworth’s potential Democratic replacements trail their GOP opponents by healthy margins, and have little chance at keep those seats in the Democratic aisle.

Oh, and there’s one other potential double whammy, this one in Pennsylvania. While the outcome of Rep. Joe Sestak’s Senate race against conservative Pat Toomey is far less assured, Sestak’s would-be Democratic replacement, Bryan Lentz, trails Republican Patrick Meehan by 5 points, according to FiveThirtyEight. Should Lentz lose to Meehan and Sestak lose to Toomey—FiveThirtyEight puts Toomey up by about 4 points, with a 97 percent chance of winning—we’ll have a fourth Democratic double-loss on Election Day.