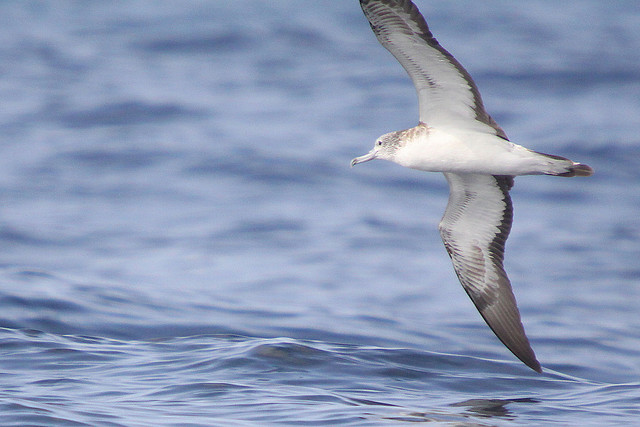 Shearwaters are long-winged, strong-flying seabirds of the open ocean who come ashore only to breed. The rest of their lives—including the time between fledging and sexual maturity, up to 12 years in some species, maybe more—are spent entirely at sea. They’re long-lived birds, with reports of one 55-year-old Manx shearwater still breeding in Ireland as of 2003. The more we learn, the more we see how these oceanic travellers follow vast systems of winds and waves across hemispheres and even oceans.
First up, there’s an interesting paper out in the current issue of The Auk about a presumed foraging association between streaked shearwaters (Calonectris leucomelas) and skipjack tuna (Katsuwonus pelamis). Foraging associations—as the term implies—are the result of a follower species (the shearwater) commonly following a nuclear species (the tuna) to capture prey flushed in the course of the nuclear’s feeding or travels. The deep blue home is full of foraging associations… including the way savvy human fishers follow seabirds to find fish. 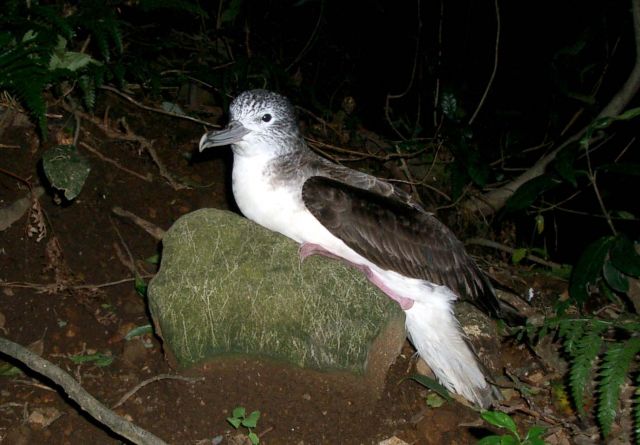 Streaked shearwater at breeding colony on Mikura Island, Japan. Photo by Kanachoro, courtesy Wikimedia Commons.
A little background: Streaked shearwaters make impressive migrations of ≤5,400 kilometers /3,300miles between Northern Hemisphere breeding grounds (Japan, China, and Korea) during the boreal summer and Southern Hemisphere “wintering” grounds (New Guinea, the Philippines, and Australia, plus Vietnam in the north) during the austral summer. Those results are reported in a 2008 paper in Ornithological Science by some of the same members of the shearwater-skipjack team during an earlier phase of study.
In their latest investigations, the researchers attached small global location sensors to 48 breeding birds in 2006, 38 of whom returned the following year with their geolocators intact. Their findings, from the abstract:

This Blue Planet video shows the dynamics of shearwaters (not sure which species) working schools of mackerel herded up to the surface, initially by dolphins, then by skipjacks. 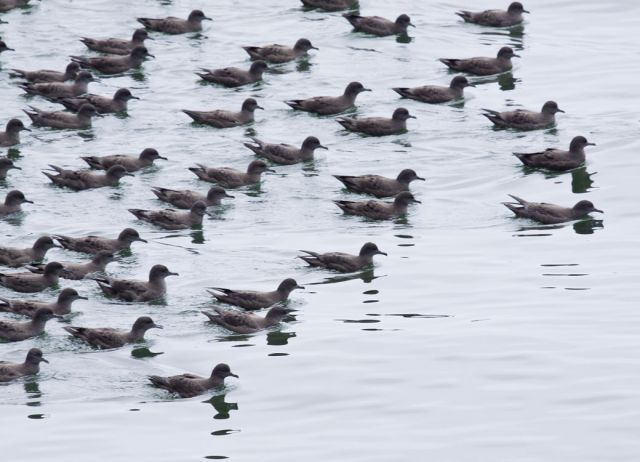 (Sooty shearwaters. Photo by marlin harms, courtesy Wikimedia Commons.) In an incredible piece of scientific detective work a few years back, a different team of researchers found that another species, sooty shearwaters (Puffinus griseus), embarked on remarkable 64,000-kilometer/40,000-mile annual migrations through the entire basin of the Pacific Ocean from Antarctica to the Bering Sea—the longest migration of any animal tracked to that point. 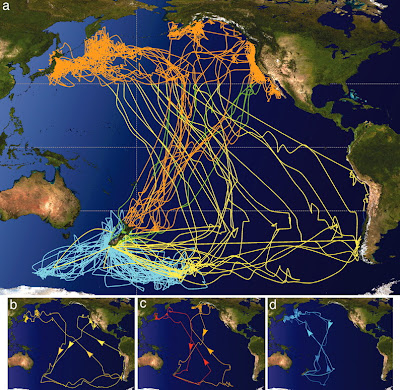 The map shows the geolocation tracks of 19 of their tagged sooty shearwaters at New Zealand breeding colonies (light blue); their migration pathways north (yellow); and their wintering grounds and southward transits (orange). Figures b–d represent the figure-eight movement patterns of individual shearwaters travelling to one of three “winter” destinations in the North Pacific. The authors suggest the figure-eight  pattern is facilitated by prevailing wind patterns and by the Coriolis effect—which influence the long-range trajectories of the birds as they rocket between hemispheres at rates of up to 910 kilometers/565 miles a day, and as they chase the waves of summer from one hemisphere to the other. 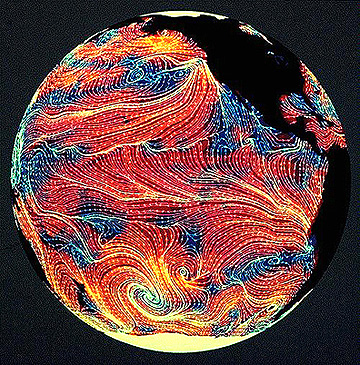 Credit: NASA/SeasatYou can correlate something of the travels of the sooty shearwaters to this map of prevailing winds over the Pacific. The 2006 sooty shearwater paper appeared in Proceedings of the National Academy of Sciences. From the abstract:

Electronic tracking tags have revolutionized our understanding of broad-scale movements and habitat use of highly mobile marine animals, but a large gap in our knowledge still remains for a wide range of small species. Here, we report the extraordinary transequatorial postbreeding migrations of a small seabird, the sooty shearwater, obtained with miniature archival tags that log data for estimating position, dive depth, and ambient temperature. Tracks (262 ± 23 days) reveal that shearwaters fly across the entire Pacific Ocean in a figure-eight pattern while traveling 64,037 ± 9,779 km roundtrip, the longest animal migration ever recorded electronically. Each shearwater made a prolonged stopover in one of three discrete regions off Japan, Alaska, or California before returning to New Zealand through a relatively narrow corridor in the central Pacific Ocean. Transit rates as high as 910 ± 186 km·day−1 were recorded, and shearwaters accessed prey resources in both the Northern and Southern Hemisphere’s most productive waters from the surface to 68.2 m depth.

But now the flying record of the sooty shearwaters been topped by a diminutive seabird, the Arctic tern, who not only crosses hemispheres but ocean basins as well. The February paper in PNAS for the first time revealed complete migrations for individual Arctic terns of more than 80,000 kilometers/48,000 miles a year. 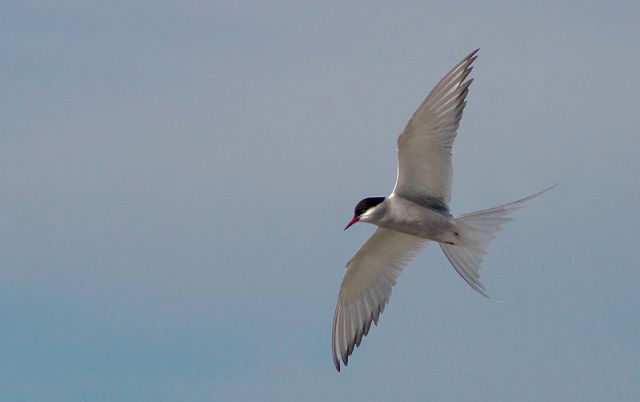 Such globe-trotting transits keep these butterflies-of-the-sea hopped up on the endless summers of the high-latitudes. They barely know night.