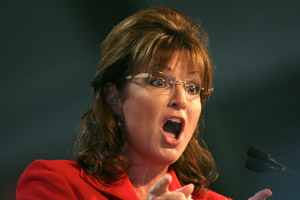 The GOP jockeying for the chairmanship of the powerful House financial services committee has ignited a nasty fight within House Republican circles. Rep. Spencer Bachus (R-Ala.), as the senior Republican on the panel, is in line for the spot, and Rep. Ed Royce (R-Calif.) is challenging him. This insiders’ tussle has drawn Sarah Palin into the fray. Yet in her desire to add Hill powerbroker to her resume, Palin has demonstrated that she is a Wall Street bailout hypocrite.

It was a tremendous flip-flop. Palin was for the bank bailout before she was against it.

Palin entered this brawl after Bachus, following the midterm elections, blamed her for the GOP’s failure to take over the Senate. Bachus was making a familiar point: because Palin backed tea party candidates in GOP primaries (such as Christine O’Donnell in Delaware) over more conventional and presumably electable Republicans, the GOP screwed up opportunities to win Senate seats ripe for the picking. “Sarah Palin cost us control of the Senate,” Bachus groused.

Palin fired back, saying that because Bachus supported “the Bachus bigger government agenda,” it was “no wonder he’s not thrilled with people like me.” She cited Bachus’ votes for the Wall Street bailout and the cash-for-clunkers program as proof he was no “commonsense conservative.” Palin’s attack was widely interpreted as her placing a finger—or fist—on the scale for Royce (who voted against the TARP bailout). It also was a tremendous flip-flop. Palin was for the bank bailout before she was against it.

In the two years since Palin was the Republican vice presidential candidate, the former Alaska governor has pulled a 180 regarding her position on the Wall Street bailout enacted by President George W. Bush. In the midst of the 2008 financial crisis, Palin held that now infamous interview with CBS News‘ Katie Couric, and she endorsed the bailout. The exchange was odd because Palin provided a confusing reply, inexplicably tying the bank bailout to health care reform, but it was clear she favored the bailout (as did Sen. John McCain):

COURIC: Why isn’t it better, Governor Palin, to spend $700 billion helping middle-class families struggling with health care, housing, gas and groceries? Allow them to spend more and put more money into the economy? Instead of helping these big financial institutions that played a role in creating this mess?

PALIN: That’s why I say, I, like every American I’m speaking with, were ill about this position that we have been put in, where it is the taxpayers looking to bailout. But ultimately, what the bailout does is help those who are concerned about the health care reform that is needed to help shore up the economy—helping the—Oh, it’s got to be about job creation too. Shoring up our economy and putting it back on the right track… And trade we’ve got to see trade as opportunity, not as a competitive scary thing. But 1 in 5 jobs being created in the trade sector today. We’ve got to look at that as more opportunity. All those things under the umbrella of job creation. This bailout is a part of that.

Weeks later, during an October 21 CNN interview, Palin gave a straighter answer, indicating her full support for the bailout:

In her 2009 book, Going Rogue, Palin noted that the bailout had been absolutely necessary, and she even chastised the House Republicans (like Royce) who had voted against it:

The House of Representatives rejected a Bush-backed economic bailout plan in a vote in which two-thirds of Republicans voted no. The impression this made on the electorate was not helpful to our cause. Millions of Americans were poised to go bankrupt or lose their savings, and the perception was that Republicans had failed to respond.

Yet months after the book came out—as tea party activists were decrying Republicans who had backed the bailout—Palin began changing her tune. During a February 6, 2010 speech at a national tea party convention, she compared the bailout to “crony capitalism,” noting, “it’s becoming a slush fund for the Treasury Department’s favorite big players, just as we had been warned about.” (She had mentioned no such warnings while supporting the program at the time of its creation.) Palin added,

While people on Main Street look for jobs, people on Wall Street, they’re collecting billions and billions in your bailout bonuses. Among the top 17 companies that received your bailout money, 92 percent of the senior officers and directors, they still have their good jobs, and every day Americans are wondering, where are the consequences for they—helping to get us into this worst economic situation since the Great Depression? Where are the consequences?

The following day on Fox News Sunday, she denounced the bailout as an insult to conservativism:

Millions of jobs have been lost because…what’s coming from the White House is just a fundamental difference from a lot of conservatives in our belief that government is not the answer. The bailouts, the takeovers of the private sector—that’s not the answer. That is not what built this great country into the most prosperous, healthiest, safest country on earth.

Without acknowledging it, Palin had completely reversed course. She had once backed the Wall Street bailout as necessary to deal with a crisis; now she was decrying it as an assault on free enterprise.

Palin went further this summer, when she contended that Alaska Sen. Lisa Murkowski’s support for the bailout was grounds for voting against her. Palin was backing Joe Miller in the GOP primary against Murkowski. In an endorsement message for Miller posted on her Facebook page in August, Palin, bashing Murkowski as a faux Republican, declared,

Alaska deserves a senator who will not talk one way in the Last Frontier and then vote the opposite way in the Beltway. It’s time for Alaskans who are concerned about endless bailouts, ever increasing debt and deficits, and the government take-over of health care (all planks Lisa Murkowski has walked) to get behind Joe Miller.

In less than two years, Palin had gone from endorsing the bailout to using it as ammo to slam a fellow Republican who had also supported TARP. (This was to little avail. Murkowski, running as a write-in, has defeated Miller.)

These days, Palin, as a political celebrity,  draws plenty of attention—for whom she endorses, for her cable show appearances, for her 2012 presidential aspirations, and for her daughter’s gig on Dancing with the Stars. Her policy ideas don’t attract much scrutiny. And Palin has complained that her record is not taken seriously:

I know that a hurdle I would have to cross, that some other potential candidates wouldn’t have to cross right out of the chute, is proving my record. That’s the most frustrating thing for me—the warped and perverted description of my record and what I’ve accomplished over the last two decades. It’s been much more perplexing to me than where the lamestream media has wanted to go about my personal life. And other candidates haven’t faced these criticisms the way I have.

Here’s one piece of her record that’s open to easy media examination. Perhaps the next time Palin goes on Fox News (as a paid contributor), someone can ask her to explain her acrobatic reversal on this key economic matter. If no one presses her on this, it will indeed prove her point that the media is more interested in her personal life than her record. In this case, though, that’s to Palin’s advantage.