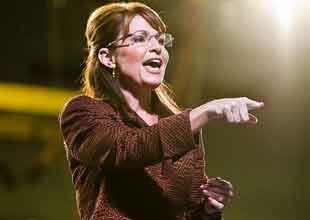 In recent months, Sarah Palin’s political action committee, SarahPAC, has paid thousands of dollars to a mysterious company that’s gone to significant lengths to mask its ownership. Addresses linked to the firm lead to mail drops. It has no website. No phone number. Not even the California lawyer who incorporated the company knew who was behind it. But a Mother Jones investigation has found that this firm is run by an unlikely foreign political operative.

Federal Election Commission filings show that SarahPAC has paid the company, Paideia Research LLC, at least $16,000 for its services. The payments to Paideia—which takes its name from the ancient Greek word meaning “education” or “instruction”—are the only research-related expenditures listed on the PAC’s latest disclosures.

Managed by a shell company, and incorporated in a state with favorable tax laws and scant disclosure requirements, Paideia’s corporate structure virtually assured anonymity. But interviews and a review of domestic and international business records led to the identity of Paideia’s owner—which presented yet another mystery: Why is Palin’s political action committee employing a Dutch right-wing journalist named Joshua Livestro, who is known for incendiary rhetoric?

Two recent federal filings for SarahPAC list a Sheridan, Wyoming, address for Paideia Research. When one local blogger visited the address, he found a low-slung, non-descript building that’s home to Sheridan Answering and Secretarial Services, a company that handles phone calls and mail for customers. (Other bloggers soon started asking questions about Palin’s mystery research firm.) When asked by Mother Jones about Paideia, Sheridan Answering’s owner, Ginger Horton, replied, “I have no idea who they are.”

Wyoming business records show that Paideia was incorporated in July. In addition to the local Wyoming address, these records list another in southern California. That address, in turn, traces to another mail forwarding service. Paideia’s corporate filings also indicate that it is managed by Pyramid Management LLC, which belongs to a California-based ex-lawyer and realtor, David DeLoach, who specializes in setting up untraceable LLCs and pre-fab shell companies in Wyoming and Nevada—states that don’t tax corporate income and have exceedingly lax disclosure rules.

In a brief phone interview, DeLoach said he vaguely remembered setting up Paideia. But as his website promises, the entire process was confidential. He said he himself didn’t know who was behind Paideia or why it was created.

So it appears the owner of Paideia truly wanted to keep its origins secret. And he might have succeeded, had Karen Wheeler, the Wyoming Secretary of State’s business compliance director, not told Mother Jones that she had recently spoken to Paideia’s owner by phone. She didn’t get his name, but said he “had quite the English accent” and told her he was based in England.

A search of British business records turned up a company called Paideia Limited. Livestro is its sole director and shareholder.

The 40-year-old is not your typical hire for an American political operation. He has worked as a columnist for the Benelux version of Reader’s Digest and the Dutch newspaper De Telegraf. He’s also the founder and editor-in-chief of De Dagelijkse Standaard (or, The Daily Standard), a right-wing political blog that weighs in frequently on Palin. In the 1990s, he worked with England’s Conservative Party; he went on to become an assistant to Frits Bolkestein, then a European Commission member for internal market and financial services.

More recently, he’s been a combative contributor to the website Conservatives4Palin. There he took on Palin’s critics on the left and the right, attacking journalists including Marc Ambinder (then of The Atlantic, now of National Journal), Politico‘s Ben Smith, and National Review‘s Jonah Goldberg, among many others.

Not surprisingly, Livestro’s views skew to the right. He helped to found the Edmund Burke Foundation, a right-wing Dutch think tank created to push back against progressive politics in the Netherlands. In one manifesto, citing the number of Muslims in the Netherlands, the foundation warned of ethnic conflict and said the country’s borders should be closed. In the Dutch magazine Vrij Nederland, Livestro once wrote that the gruesome photos depicting detainee abuse at Abu Ghraib resembled little more than an out-of-control frat party; he complained that Abu Ghraib critics were “cry-babies” exaggerating the episode’s signficiance. On his blog, Livestro similarly quipped that the CIA’s torture techniques—with the exception of waterboarding—were milder than the hazing methods of fraternities. On the issue of climate change, Livestro falls into the denier camp: Last year, he wrote that the Climategate e-mail scandal showed there was no need for tackling a global climate treaty.

SarahPAC’s filings note that Paideia provides “research consulting.” On Friday, in an article about Palin’s 2012 aspirations, Real Clear Politics reported in passing that Livestro had been hired by the Palin camp to advise her on the European debt crisis. (The story didn’t mention Livestro’s company, Paideia.) Recently, Palin, who is positioning herself for a possible presidential bid, has increasingly been weighing in on financial matters. Earlier this month, she panned the Federal Reserve’s decision to buy billions in Treasury bonds to boost the economy. And she jousted with the Wall Street Journal, which had debunked some of her views on monetary policy.

Contacted by Mother Jones, Livestro would not discuss his work for Palin or answer questions about Paideia. He referred questions to SarahPAC, which did not respond to calls and emails.

Livestro’s hiring has raised eyebrows on the right. “Why is a potential president relying for economic advice on freelance journalists rather than Nobel Prize winners?” David Frum, a former speechwriter for President George W. Bush, asked on his blog. “It’s almost as if Gov. Palin finds the idea of expertise—not merely incomprehensible—but actively repugnant.” Livestro shot back: “I know it’s not on a par with a Nobel Prize winner, but to suggest Gov. Palin’s decision to hire me instead is evidence of some anti-expertise attitude is perhaps a tad off the mark—like all of your writing about her.”

For Livestro, working for Team Palin is a significant step toward fulfilling his biggest dream. “His greatest wish is to work for the 2012 Sarah Palin presidential campaign,” reads his bio on one conservative blog. With Paideia’s cover blown, the mystery that remains is why this Palin fan was so secretive about his work for her.