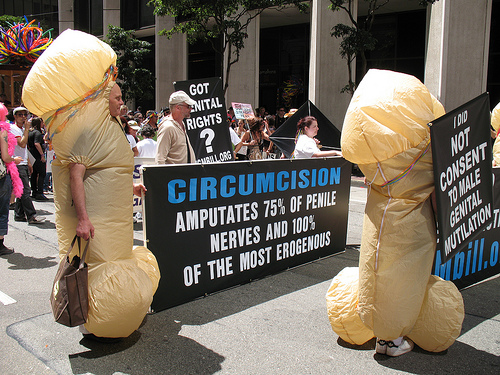 Last week, San Francisco cut the “happy” out of McDonald’s Happy Meals by banning the packaging of fast food with plastic toys. Now the city may soon weigh another controversial effort to protect its children: A law banning doctors and mohels from coming after Mr. Happy.

On Monday, San Francisco resident Lloyd Schofield filed notice that he intends to get a proposal to ban male circumcision onto the city’s fall 2012 ballot. The initiative, which would ban the “genital cutting of male minors,” was written by a San Diego-based nonprofit group, MGMbill.org (MGM=Male Genital Mutilation), which has tried unsuccessfully to push similar measures through Congress and 14 state legislatures. As a press release from the group notes, “Ten out of ten babies oppose circumcision—and for good reason.”

“When a baby is circumcised, they are removing 50 percent or more of the most erogenous tissue of the penis,” explains Schofield. “It’s really just time to get the facts on this.” He says he first began questioning circumcision years ago when he noticed that uncircumcised boys were a minority in his school locker room. Two years ago, he became an “intactivist,” short for “intact activist,” after seeing members of the Bay Area iNtactivist Group (BANG) march in the city’s gay pride parade, dressed as giant phalluses and carrying a picture of an indignant-looking infant wondering, “You wanna cut off what?” (See their video below.) Schofield, who is is also a foreskin restoration activist, won’t say whether he is or isn’t “intact.”

Many parents don’t need a law to convince them to spare their sons from the scalpel. The portion of newborn American boys that gets snipped fell from 64 percent in the late ’70s to 56 percent in 2006, most likely due to immigration from circumcision-averse regions. In immigrant-saturated California, only 20 percent of newborns are circumcised. Schofield claims that only 10 percent of San Franciscan newborns are. “People have voted with their children already,” he says.

Circumcision is, of course, an important sacrament for many Jews, and some lawyers have already suggested that Schofield’s ballot initiative could be an unconstitutional violation of religious freedom. Yet Schofield counters that “your religious freedom stops with damaging someone else’s body.” He argues that allowing male circumcision yet prohibiting the female variety, which has also been practiced on religious grounds, denies males the equal protection under the law guaranteed by the 14th Amendment. Female genital mutilation, he says, is “horrible and it needs to be stopped. It has been pretty much been stopped in the United States. We just need to do the same with men.”

Here’s a video made by the intactivists: