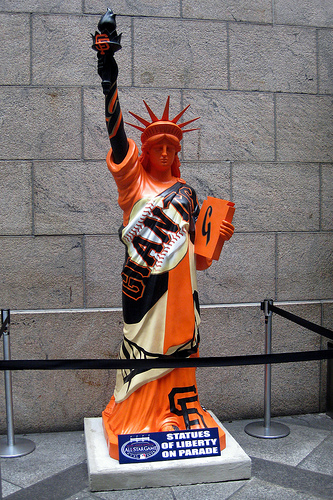 At my polling place in San Francisco this morning, all the talk was of a contest that didn’t appear on the ballot: The Giants’ World Series victory last night over the Texas Rangers. A Birkenstock-clad woman from the Haight explained her glee. “It’s because of Texas,” she said. “It’s the land of oil drilling, conservative textbook defining, Bush electing—you know?”

I know. In a depressing election year for liberals, the Giants’ unlikely victory has emerged as the rare silver lining: A way to sock it to all those conservative Republicans who are going to otherwise kick our asses at the polls today. As my colleague Adam Weinstein notes, the long-haired, beard-wearing, ganja-puffing Los Gigantes embody Left Coast rebellion. Meanwhile, former Rangers co-owner George W. Bush was on hand along with his father to root for the Red State home team at Game 4. That San Franciscans got to rob Bush of a win makes up (a little bit) for the one that he stole in 2000.

People say that sports is a way to distract the masses from the social fights that really matter. Or maybe it’s a way to blow of steam so that we don’t shoot each other. Of course, El Salvador and Honduras once fought a war over soccer.

All I know is that sports rarely fits neatly into politics. Take the example of Texas, where Democratic gubernatorial candidate Bill White actually has a small chance of toppling incumbent arch-conservative Rick Perry. Mother Jones‘ Suzy Khimm points out that shifting demographics will turn Texas blue in the not-distant future. Or take the example of me: I was born and raised in Dallas and my father hasn’t talked to me in awhile, not because we disagree on politics (he’s a staunch Democrat) but because we kind of disagree on baseball.

I ultimately decided to root for the Giants because I left Dallas after high school and have lived in the Bay Area for almost ten years. Still, I would have been happy if either team had won. I wish I could say the same thing about politics.