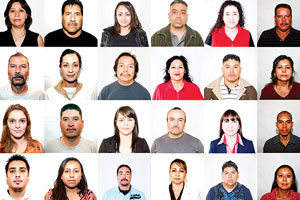 Joe Dierkes was burned out. Though only in his mid-50s, after 11 years as a federal immigration judge, he was ready to hang up his robes. His docket in a Minnesota immigration court was pushing 1,300 cases at any given time, and he sometimes conducted 50 hearings in a single day—one every eight minutes, on average—weighing the last-ditch petitions of immigrants who, caught by authorities after living and working in the US for years, had exhausted all other means of staying in the country. He was taking work home almost every night and weekend, but it wasn’t just the workload that was wearing him down. Amid the hundreds of routine cases—illegal workers picked up during raids, legal immigrants whose residency had been revoked when they were convicted of a crime or felony—were complicated asylum petitions where the stakes could not have been higher. Applicants often told him that if they were deported, they would be raped, tortured, or killed. “You either believe the person or you don’t,” he says. In asylum cases, he’d hear testimony over the course of a single morning and issue a ruling by lunchtime, then do another few cases in the afternoon. Many of Dierkes’ decisions resulted in immigrants being sent back to the countries they’d come from; he never found out what happened to them.

Making life-or-death decisions on a daily basis, Dierkes didn’t want to be wrong—but he could never be sure he was right. Sometimes he’d realize after the fact that an inconsistency he’d spotted in an applicant’s testimony wasn’t one after all, or that he’d judged someone unfairly because she wasn’t a very polished witness. “There are some cases where if you think about them for a while, you realize, ‘Maybe my conclusions were not absolutely correct,'” he says. In 2008, after 11 years on the bench, he quit.

Among the country’s 235 immigration judges, there is a consensus that the courts are drastically overloaded. A historic backlog is partly to blame, but so is the Obama administration’s goal of deporting 400,000 people this year—about 1,700 cases per judge. The focus is on numbers, not the quality or fairness of the process, says Bruce Einhorn, a former L.A. immigration judge. Successive administrations have viewed the courts, which are part of the Department of Justice,* as a “widget factory,” he says. “The only issue they consider is how many people are needed to produce as many widgets as possible.”

Caught in the middle are the judges, for whom mind-numbing bureaucracy collides with thorny moral issues. Most of the time, they work without even basic staff like bailiffs and stenographers. Increased immigration enforcement means that their workload is the highest it has ever been—three to four times larger than caseloads in other federal courts—but a combination of slow hiring and high turnover has left one in six judge positions vacant.

In a recent survey, immigration judges reported dramatically more stress (PDF) than other professionals: They were more burned out than doctors, international aid workers, even prison wardens. It was incredibly difficult, they said, to know which asylum claims were genuine: who had truly suffered horrors, and who had been coached by relatives or “travel agents” who promised immigrants a bulletproof story. As one judge put it  (PDF), “It makes me feel ill to grant asylum to someone who I believe is probably lying, but it also makes me sick to think that I have denied protection to someone who really needs it.”

Immigration judges are more burned out than doctors and prison wardens. It is incredibly difficult, they say, to know which asylum claims are genuine: who has truly suffered horrors, and who has been coached by “travel agents.”

These aren’t idle fears. In 2004, just two and a half weeks after a Denver immigration judge deported him, a 16-year-old Guatemalan boy was killed by the gang members he had left the country to escape. In February, a similar fate befell a former gang member deported to El Salvador.

The pressure can wear down even the most compassionate judges. In 1990, Jeffrey Chase was a young attorney who had made a name for himself as an outspoken advocate for asylum seekers. In a 1995 interview, he scolded judges who made up their minds before fully hearing cases out. “A judge,” he said, “needs to start each case with a clean slate.”

But soon after making that statement, Chase took a job as an immigration judge in New York City. And over the next several years, he changed. He started addressing petitioners with skepticism and accusing them of lying. He scoffed at an asylum applicant who said he’d fled persecution in China, suggesting that the smugglers who’d snuck the man into the country had fed him a sob story: “Only people who are coached by snakeheads talk like that.” One of his courtroom speeches about lying asylum seekers took up 12 pages of transcript.

Attorney after attorney appealed Chase’s rulings, arguing that their clients could not receive a fair hearing in his courtroom. Federal judges struck down several of his decisions; his conduct in one case prompted the circuit judges to describe him as “argumentative, sarcastic, impolite, and overly hostile.” In early 2007, Chase was removed from the bench.

Now an attorney adviser to the Board of Immigration Appeals, Chase declined to be interviewed for this article, citing Justice Department rules. A former trial attorney who appeared in Chase’s courtroom says that asylum fraud was rampant in the cases Chase handled. “I think he genuinely cared and wanted to do the right thing,” she says. “But he just struggled too much with listening to these cases over and over and over again.”

In February, the American Bar Association released a lengthy report (PDF) warning that the system was “failing to meet our national expectations of fairness and effectiveness” and recommended numerous reforms, including hiring 50 percent more judges. A spokesperson from the Executive Office for Immigration Review, the federal department that oversees the immigration courts, said it expects to hire nearly 50 by the end of the year. But Denise Slavin, vice president of the National Association of Immigration Judges, says even more are needed, since the backlog of cases continues to grow. As a result, she says, many judges are now considering early retirement—which only leads to more vacancies.

Dierkes believes that nothing will change in the courts until the immigration system itself is overhauled. “This is a question for the public,” he says. “Where do we want to devote our resources?” For now, the Obama administration’s focus remains (PDF) on hitting its deportation goal, with few additional resources for the courts. The results, says Dana Marks, the head of the National Association of Immigration Judges, can be tragic. “These are the equivalent of death-penalty cases,” she says, “and we are conducting [them] in a traffic court setting.”

* Correction: An earlier version of this article erroneously said that immigration courts are part of the Department of Homeland Security.