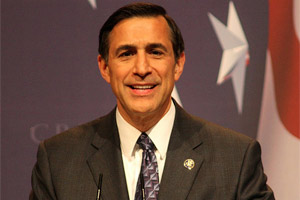 Last Tuesday, as Americans across the country headed to the polls, a group of climate scientists gathered in Denver to discuss strategies for fighting back against right-wing attacks on global warming science. Their timing couldn’t have been better. With the ascent of the Republicans, climate science—and scientists—will be a major target for the new House majority.

The ramifications of the vote didn’t go unnoticed among the scientists gathered at the annual meeting of the Geological Society of America. The crowd was asked multiple times whether they’d sent in their absentee ballots. One of the coordinators of the event was Michael Mann, the head of Pennsylvania State University’s Earth System Science Center and public enemy number one in the eyes of climate-change skeptics. His presentation at the event outlined some of the major tactics of science deniers—particularly those in Congress. “What’s troubling is that these politicians could be controlling major committees in the House and Senate depending on what happens today,” Mann told the crowd. And come January, they will be, at least in the House.

Rep. Darrell Issa (R-Calif.), the incoming head of the House Oversight and Government Reform Committee, has pledged to hold hearings on the “Politicization of Science,” which will consist of a rehashing of the so-called ClimateGate “scandal.” He’s also called for greater oversight of the Environmental Protection Agency’s coming regulations of greenhouse gases. With Issa in charge, the oversight committee will devote a good deal of time to hauling government and university climate scientists before Congress.

Last November’s release of thousands of emails stolen from a web server at University of East Anglia in the UK only added fuel to the fire. The emails showed climate scientists on the defensive about attacks from climate deniers, and sometimes acting a bit catty. But selected portions of them were spun in the denialist world as evidence that climate change is actually a giant hoax perpetrated by evil scientists.

For the past year, the story has been blown up by deniers inside and outside of Congress, despite numerous investigations on the part of universities and independent commissions that found no evidence of wrongdoing or fraud. And nothing said in the emails could change the fact that thousands of studies have validated the fact that carbon emissions from human activity are causing the planet to warm. If climate change were a hoax, that would mean that more than 97 percent of scientists in the world who agree with the consensus are party to the conspiracy.

Issa says he just wants a “careful relook” at the science. But that’s hardly the tack that he’s likely to take, given that he’s argued that it’s “very clear that [climate scientists] played fast and loose with both the truth and our money.” He also indicated that he plans to trot out the same climate deniers that the Republicans have relied on for years—most of whom aren’t scientists at all and have been widely discredited. “I think science should always be filled with skeptics, and I want to make sure the skeptics are heard,” Issa told The Hill in September.

Republicans are also mulling whether to keep the Select Committee for Energy Independence and Global Warming, formed when Nancy Pelosi assumed the role of Speaker in 2007, for the sole purpose of using it as a launching pad for climate investigation. Rep. Jim Sensenbrenner (R-Wis.), a climate denier who has served as the ranking minority member of the panel since its creation, has said he wants to use the panel to probe what he has called a “massive international scientific fraud.” Other Republicans have chafed at the idea of keeping the panel alive, but its fate remains undecided at this point. “I have not heard any discussion on that issue,” Michael Steel, spokesman for likely Speaker John Boehner, told Mother Jones.

While Issa has allowed that global warming could be happening, Sensenbrenner has only escalated his aggressive rhetoric about not just the science, but the scientists. “There’s increasing evidence of scientific fascism that’s going on,” Sensenbrenner declared during a hearing last year.

There’s also a possibility that Joe Barton (R-Texas) will win his bid to serve as chairman of the Energy and Commerce Committee for the next two years. (Caucus rules limit chairs to six years in the top spot on committees, but Barton, who has previously chaired the committee, is seeking a waiver.) “Smokey Joe” Barton thinks global warming is “absolute nonsense,” and in his previous round as chairman launched an investigation into Mann and other scientists. Barton has also taken more campaign contributions from fossil fuel interests over the years than any other House member, which has never left much doubt about his motivations.

Mann, whose emails figured prominently in the East Anglia hack, will likely be a primary target of the latest round of congressional witch hunts. He’s already been the subject of Virginia Attorney General Ken Cuccinelli’s climate science crusade. Anticipating the Republican conquest, Mann penned an op-ed in the Washington Post in October. “As a scientist, I shouldn’t have a stake in the upcoming midterm elections, but unfortunately, it seems that I—and indeed all my fellow climate scientists—do,” he wrote Mann, warning of a “hostile investigation of climate science” by lawmakers including Issa and Sensenbrenner.

“The truth is that they don’t expect to uncover anything,” Mann continued. “Instead, they want to continue a 20-year assault on climate research, questioning basic science and promoting doubt where there is none.”

Issa, Sensenbrenner, and Barton would have significant support for their war on science in the 112th Congress. Half of the caucus flatly denies that the planet is warming. Only four House Republicans have openly accepted the science of climate change. (Another five who are returning next year voted for last year’s climate and energy bill, but have stayed quiet when it comes to their stance on the science of global warming.)

Scientists are bracing for what is likely to be at least two years of renewed attacks. “If oversight crosses the line into harassment of scientists, we’ll be there along with the rest of the scientific community to defend our colleagues,” said Francesca Grifo, senior scientist and director of the Scientific Integrity Program at the Union of Concerned Scientists. “We have lots of work to do to protect federal scientists and the science that goes into federal decisionmaking.”