Some very cool research coming out of Binghamton University from researchers who’ve revived bacteria trapped for thousands of years in water droplets embedded in salt crystals. The video explains the scope of their work:

Tim Lowenstein, prof of geological sciences and environmental studies, and J. Koji Lum, prof of anthropology and biological sciences, are investigating the remains of life in fluid inclusions inside minerals—some dating back a million years. So far they’ve found every form of unicellular life—archaea, bacteria, algae, fungi, and viruses—embedded in these time capsules. They’re also encountering entire ecosystems of tiny lifeforms, for instance the algae likely eaten by the bacteria living together in a pocket of water. 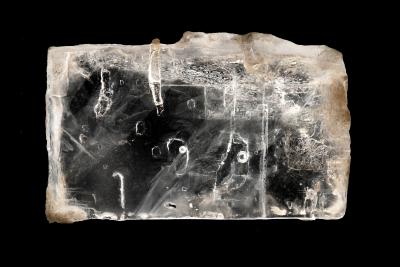 The samples are drawn from California’s Death Valley and Saline Valley and from sites in Michigan, Kansas, and Italy—places where temperatures may have reached 130 degrees Fahrenheit/54 degrees Celsius in the past, and where the intrusions of water trapped in the rocks might be extremely saline. Nevertheless, extremophile life forms thrive in such conditions.

Some of the microbes are still alive after deacades or more of inclusion. The dead ones are yielding their DNA. But that’s only the beginning. By analyzing changes in the salinity of these water pockets over time, Lowenstsein hopes to reconstruct ancient climates. Coupled with changes in the DNA, the team hopes to observe organisms and ecosystems evolving over geologic time in response to changing climate. Sort of like an evolutionary timelapse.

Here’s an interesting video from within the timelapse of a live art installation. The artist is creating a visual work exploring how it is that so much DNA fits into so little space inside the nuceli of cells. Along the way, he ruminates on his struggles to represent all that information in his own very small space on a canvas destined for the 800-pixel-wide visual “inclusion” of a web page.