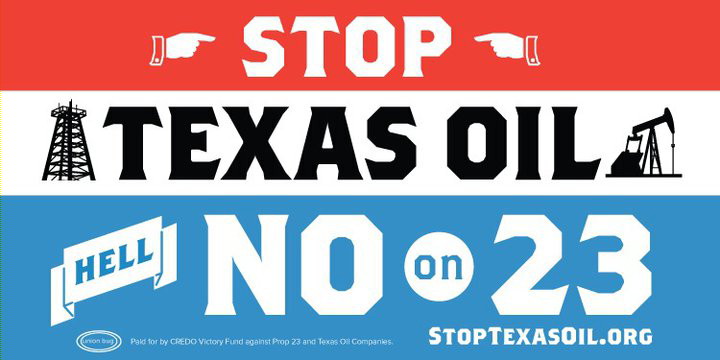 Looks like Proposition 23, the attempt to torpedo California’s landmark AB32 climate bill, is going down by a very large margin. According to the most recent tally, 61 percent of state voters said “No” to the initiative.

Enviros cheered the defeat of Prop 23, which would have rolled back the 2006 law that required the state to cut emissions to 1990 levels by 2020. Implementation of that law is set to begin next year. “Tonight California voters delivered a decisive win for the clean energy economy,” said Steven Maviglio, spokesman for the “No on Prop 23″ campaign. ” In the midst of a major economic downturn, and with a barrage of fear mongering and scare tactics, voters still chose clean energy over dirty energy.”

The debate about the law—which had bipartisan support, including the backing of Republican Governor Arnold Schwarzenegger—prompted quite a bit of spending from both sides. Oil companies, many of them from out of state, spent almost $10 million on the campaign to defeat AB32. The “No” campaign, with major backing from the clean-tech community, venture capitalists, and environmental groups, raised $29.8 million.

Notably, Prop 23 represents the first time that American voters have been asked to weigh in directly on such a comprehensive climate and energy plan. It is also seen as a way, by example or by the dint of California’s economic clout, for progress to be made on climate policy even in the absense of federal leadership.