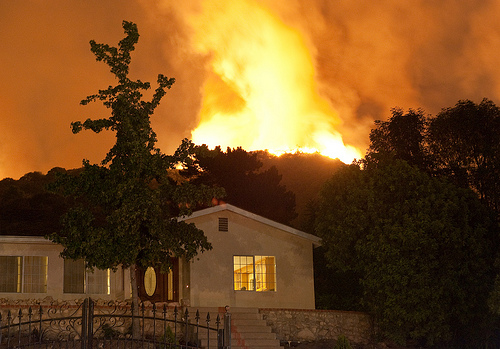 Like one of those homes in the tinderbox hills above Los Angeles that miraculously survives a wildfire that scorches the rest of the neighborhood, California held on last night against the Republican rager that swept the nation. This was more than just a matter of luck or progressive temperament, though. This trend-setting state had a buildup of conservative, anti-establishment voters long before they became known as tea partiers. But they’ve already wreaked their havoc and mostly burned themselves out. There’s not much populist outrage left around the house of California. Mostly there’s just smoldering populist exhaustion.

Back in 2003 it was a different story. In an unprecedented recall election, voters who were incensed by California’s energy crisis swept out the establishment Democratic governor, Gray Davis, and replaced him with a political outsider who pledged to cut taxes, root out “waste, fraud, and abuse,” and say “hasta la vista” to liberal special interests. Sound familiar? Now, of course, Governor Arnold Schwarzenegger is as unpopular as Gray Davis was during the recall. And California voters saw no reason on Tuesday to believe that Meg Whitman would turn out any differently. One nifty ad juxtaposed video clips of Schwarzenegger and Whitman mouthing off the exact same talking points.

Schwarzenegger’s failures aren’t entirely his fault; he’s been stymied by opposition from ideologues in his own party. Although Republicans make up only about a third of the state legislature, they wield an outsized influence over the state budget and taxes, which both require a two-thirds supermajority to become law. Pathologically unwilling to compromise, Republicans in the legislature have repeatedly spiked budget negotiations, forcing the state to allow its credit rating to be downgraded and even issue IOU checks to its workers in order to provide basic services.

This might be what tea party/Republican rule looks like in America between now and 2012. Many of the incoming Republican freshmen see a mandate to obstruct the Democratic economic agenda in almost any way possible. And as I’ve noted, Rand Paul alone could substantially freeze legislation and appointments in the already glacially slow-to-act US Senate.

But the California experience also suggests that none of this will last. Fed up with the state’s fiscal gridlock, voters passed a referendum yesterday that stripped the GOP of its cherished supermajority requirement for passing a budget. They decided that hothead outsiders might not accomplish as much as veteran legislators (Governor-elect Jerry Brown and returning Senator Barbara Boxer are both long-time politicians). And they held the line against a substantial GOP takeover of House seats and an assault on the state’s groundbreaking climate change law. If California is any indication, the Republican wildfire of 2010 will be hot, but it won’t last long enough to keep the tea pot boiling.