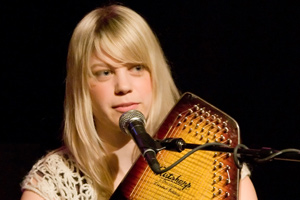 If you remember June Carter Cash then you’ll certainly recall her autoharp, the fretless cousin of the zither, with buttons that allow the musician to play automatic chords. Canadian folk singer Basia Bulat deserves some credit for reviving the instrument in the contemporary music scene, although, as she will tell you, she’s far from the only person strumming one. “Sufjan Stevens uses it in almost every song,” she insists, then ticks off a list of others: “Grizzly Bear, PJ Harvey; the first time I saw it was at a Bonnie Prince Billy concert.” At performances, fans can catch Bulat clad in brightly colored skirts, blond hair streaming, cradling her autoharp and belting out lush folk tunes—her Tracy Chapman-like voice has almost the opposite timbre as Cash’s.

Her instrumental talent is extensive. The daughter of a music teacher, she grew up playing piano, upright bass, flute, guitar, you name it. She  experiments with all sorts of obscure instruments, like the hammered harp and the ukelin (a cross between a mandolin and a ukulele). “A lot of them that I found, you would get out of an old Sears catalog as a novelty,” she explains. “I think they were trying to sell them as the next big thing, but they never quite made it.”

These instruments don’t tour well and get out of tune very easily, so why bother? “I think I just like hybrids, I think I like weirdos,” Bulat replies.

Bulat hails from Toronto, and has Polish roots (her name, in case you were wondering, is pronounced BAH-sha boo-LAHT). She collects vintage hats—her favorite right now is a “Polish grandpa hat”—and you’re more likely to spot her in wool scarves than stilletos. She spent her college years in London, Ontario, hosting classically trained musicians at her house. In the summer of 2006, she moved to Montreal where she recorded her debut album, Oh My Darling, with Howard Bilerman, formerly of the Arcade Fire.

By the time she made it to America, she had already earned recognition from NPR and a nomination for the Polaris Music Prize, but her experience here yielded many firsts. “It was my first tour, the first time I’d traveled extensively, the first time I tried to make a living out of music,” she says, overwhelmed by the memory. Though lonely and exhausting, her time on the road—through the Smoky Mountains and Nevada deserts—generated rich fodder for the tracks of her new album, Heart of My Own. The songs are expansive and earthy, much like the territory she crossed, with plenty of room carved out for her deep, opulent voice.

One song, “Gold Rush,” drew inspiration from Bulat’s fascination with the Yukon. She had spent much of her life romanticizing the northern Canadian territory, with its untouched beauty. “The idea of the north really looms large in Canada,” Bulat reflects. “In literature and art and music, it’s a very important part of Canadian culture. I was obsessed with the idea.” The song tells of a man who loses himself to the need for gold: You saw the light of golden rush / You said you couldn’t fight it off / This is the story of the one you lost / And I wanted to run over your love.

In many ways, the fixation over gold during the Dawson City days—”crazy speculation, and then totally clearing out a place”—serves as an ominous parallel to the fascination with undeveloped places like the Yukon. “To go there, you are going to be contributing to its demise, you know, you are going to be flying there or using some sort of fuel to get there,” she concedes.

“Of course, when I actually made it to Dawson, certain elements of the place totally fulfilled what I was looking for, and other elements were completely different, what I had never expected,” she remembers. “The communities and the connections between people were really strong there, and it’s kind of built on something intangible but really special.” 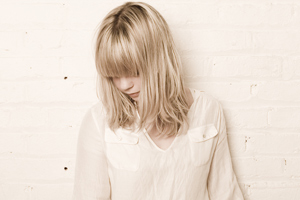 Basia Bulat: Photo by Jenna WakaniHeart of My Own centers in on an individual’s relationship to place. The title track, Bulat says, reflects her need for consistency amid transience. “I was really looking for something steady,” she says. “I was really insistent to my brother [her drummer]: just the kick drum, just the beat, only play the kick drum.” But the touring seems to have paid off. At San Francisco’s Hardly Strictly Bluegrass fest, she wooed the crowd with a Polish song about zoo animals, enchanted them with her soulful voice and her rotation of adorable, oddball instruments, and left the stage to a standing ovation.